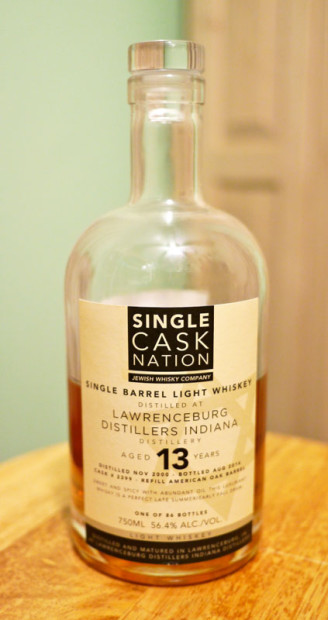 Tasting notes:
On the nose, we got notes of pillow at the end of a fantastic nap, vidalia onion sautéed for hours until perfectly caramelized and then served with an espresso fig balsamic vinegar, and an elusive umami note that surfaces and dives as unpredictably as a male otter obsessed with a human on the dock above. After nosing it for a while, we also found notes of sedated butterscotches. I want to be sedated…like them.

As the nose bled into the mouth (it was heady stuff nosing this dram, and we all found ourselves so engrossed, so intertwined with it, that next thing we knew, we’d already started drinking it), we found ourselves surrounded by a flock of butterflies with gumdrop wings. While marveling at that, we then found ourselves under assault: a mischievous child was shooting at us with a banana bow and arrow. And then with elongated mangoes. Wow, what a trip.

It was at this point that the mouth revealed itself fully: it was the best lollipop we’d ever had. This is the kind of lollipop you’d snatch from a child’s hand, or maybe even pick up off the floor of a portable toilet. I shit you not. The burn, the sizzle of this dram as the mouth goes into the finish is sparklers, not more deadly fireworks ordinance. It’s like playing Candy Crush if Candy was a really heavy woman and you were into that. The finish is long. Like the credits to Avatar, only much more satisfying. Wait, that last bit wasn’t saying a lot. It’s long, long, long, like playing a complete game of Monopoly with your best friend when you were a kid–and, after fighting nearly to a stalemate, getting a couple of good rolls of the dice that opened the door to wiping him out. Better.

Rating:
On the scale of caramelization processes that produce exquisite results–
The Single Cask Nation 13 Year Old Light Whiskey from Lawrenceburg Distillers Indiana is the bark on a rack of pork ribs cooked for two days in a Memphis pit with nothing but a great dry rub to form the basis of that bark (or crust)–I feel sorry for the vegetarians just thinking about it.
–Stephen