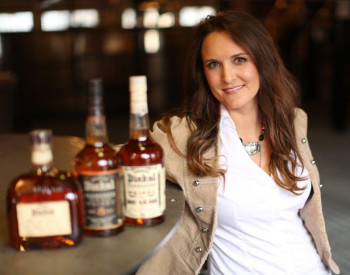 MI: Ask your average person what makes Tennessee Whisky special and they will say something about charcoal filtration.  But Dickel adds virgin wool blankets to the filtration process.  What do they add to the process? Do they keep the whisky warm during chill filtration (if you do that)? And a follow up: Is this a problem for people like Stephen who get itchy if they wear wool sweaters?

AH: The virgin wool blankets aid in the filtration process when we flood our charcoal filled tanks with whisky by ensuring the charcoal mellowing happens evenly in the tank.  And rest assured, these wool blankets have the exact opposite effects of those itchy sweaters – making our whisky the smoothest sip around.

MI: We assume the George Dickel No. 1 was the first recipe, since it’s unaged whisky and the first step in the process. But what happened to recipes Numbers 2 through 7? And what about 9 through 11? We’d like to imagine that Numbers 5 and 7 in particular were stolen as part of an ongoing prank war between Jack Daniels and George Dickel when they were in college. What’s the real story?

AH: Well, you’re right – the numbers do refer to recipe numbers which were very common back in George’s day.  Distillers would try different mashbills, techniques, etc. and label them with a number to ensure everything was kept organized.  Numbers 1, 8 and 12 were winners for us.

But now that you say it, prank wars do sound kind of fun…. 😉

MI: We followed with great interest the lawsuit Diageo engaged in over the warehousing of some of your whisky at the Stitzel-Weller Distillery in Kentucky. The Tennessee Attorney General found that no violation of state law had taken place, and if we read that decision correctly, it opens the door to all sorts of storage solutions for you outside of Tennessee. In other words, our basements are available. Actually, what do you think about Dickel pioneering a crowd-storing program (you could call it Caskstarter)? Barrels to the people!

AH: Sounds like fun to me, but our lawyers shot it down before I could even finish the sentence.  Bummer!

The whisky you’re referencing was never included in George Dickel products though as all our whiskies made at Cascade Hollow are aged here as well.  We’re proud of our Tennessee roots and love calling this great state home.

MI: And on a somewhat related note, have you thought about releasing a limited edition “Pappy Van Dickel No. 23” just to confuse Bourbon poseurs?

MI: Your popular and collectible “Powderhorn” Decanter was used in episodes of Star Trek and, later, Deep Space 9 (see: http://www.pinterest.com/quarterfront/whiskey-and-star-trek/)  But apparently they filled it with Saurian Brandy instead of your delicious Tennessee Whisky.  How many Hollywood prop managers should be fired for this outrage?

AH: I guess that depends.  Surely they drank the Dickel first, right?  If so, raises for everyone.  If not, fire ‘em all! 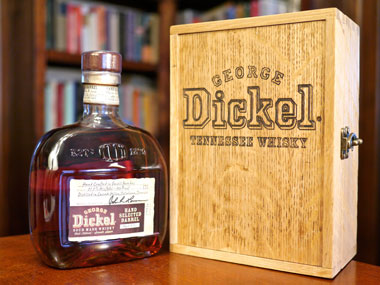 MI: Bill here. Dickel is currently touting its Barrel Program by getting some folks to give a friend or family member a bottle of George Dickel Barrel Select. My only friends are ferrets, and when I gave them the bottle, all they did was scootle all around it like hungry mosquitoes swarming a blood-engorged leech (not unlike these guys). Should I be hurt?

AH: Sounds like that leaves you with a full bottle of George Dickel’s finest.  I’d call those great friends!

MI: You received Highly Commended recognition from Whisky Magazine’s Icons of Whisky USA awards this year for your previous role as Visitor Center Manager. We hear that the distillery tour at Dickel is one of the best American Whiskey tours for whiskey geeks. We take it that’s because you put some of the same expertise that got you to your current position as Distiller to use in your work in the Visitor Center. For us whiskey geeks, what’s the coolest thing about the George Dickel Distillery Tour and Visitor’s Center? And what’s the worst behavior you ever saw from a visitor?

AH: The coolest thing about our tour of Cascade Hollow is that visitors get to see how our whisky is truly Handmade the Hard Way.  When you walk through, you won’t see a lot of computers.  You will, however see a lot of our employees weighing grains and rolling barrels by hand.  That sense of trade handmade craftsmanship is a rare thing these days and I think people really appreciate seeing it in action.

And as for bad behavior, well, let’s just say we run a tight ship.  No bad behavior allowed!

MI: Bill here again. I remember getting this question wrong when I took the SATs.

How should I have answered this?

AH: Hm.  I think that one may have tricked me too, but let’s go with George Dickel Barrel Select :: computers because there’s not a single computer involved.  We handpick every barrel – making it a really personalized experience for us and those who enjoy our Barrel Select.

MI: We’ve heard tell that the George Dickel No. 8 is aged between 6 and 8 years, and the Dickel No. 12 between 8 and 9 years. This is considerably longer than most Kentucky Bourbons in similar price ranges. Is this a statement about the relative maturity of Tennesseeans and Kentuckians? Stephen’s over here emphatically nodding yes. But then again he is from Tennessee. We know that Diageo also has some Kentucky Bourbon producers in its portfolio, so we don’t want to get you in trouble here, so we’ll make this about the states generally: How much better is Tennessee than Kentucky?

AH: You guys ARE trying to get me in trouble!  While I can’t comment on the greatness of states in general, I can say as delicious as some bourbon is, I’ll take a glass of No. 12 on the rocks over just about anything!