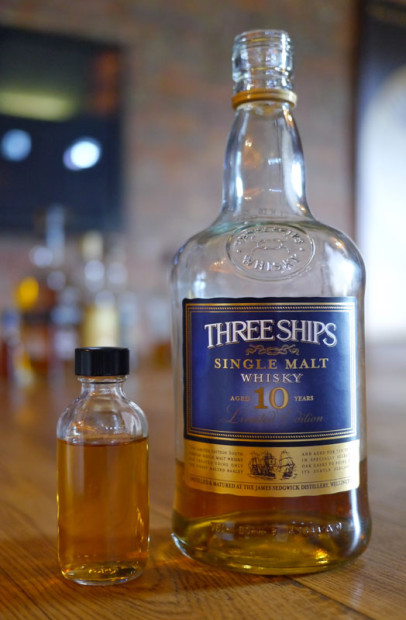 Tasting notes:
I had this dram during my third trip to South Africa, but I don’t think of this as the third of my three ships. Instead, I think of the Niña, the Pinta, and the Santa Maria. Admittedly, it’s a decidedly anachronistic and geographically misplaced reference for a South African whisky. Except it isn’t: those three ships made the United States we know now what it is, with all of the wonder and ugliness of its history. I see so many parallels with all of this in the South Africa I know: a stunningly gorgeous country that bears the scars of its difficult past, but that also shines now despite them and as it continues to move past them.

Shall I torture this metaphor and extend it out in an embarassingly ham-fisted way to the whisky itself? Sure! Why not?

It’s a Single Malt made in South Africa by a man from England trained in Scotland. It’s 10 years old, but it matures much more quickly there, especially compared to the pace of development in the old empires…

OK, that’s enough of that. Really, the nose hits you at first with a crazy fun, strange sweetness. It’s pencil erasers shaped like pandas, then covered in marzipan and added, along with chopped fruit, to a fantastic sangria. Then that sangria is served with an entree of pork medallions with pineapple and pine nut chutney. That seems like a lot to be going on just on the nose, you say? Well, yes. Just so.

The mouth presents a lovely sherry note. Sweet and familiarly Scotchy, even though it’s all South African. Imagine match heads dipped in the ear wax of a water buffalo. Then imagine that same thing minus the difficulties with that would cause for one’s ability to make fire. There’s also a lovely grapey, winey note. Burgundy, says John. Cabernet, says Bill. Pinotage, says Stephen, from Constantia, no less. Boom!

The finish is really lively. If it were a Native American, it’d be Dances on Tongues. And boy does it dance. And dance and dance. This whisky is a finish bomb. Its fallout is immense. It’s fellout. John suggested that–I have no idea what it means, but it feels right. As does this whisky.

Rating:
On the scale of Christmas carols–
The Three Ships 10 Year Old Single Malt Whisky is “I Saw Three Ships”–A variant of the classic “Greensleeves,” it references the magi (ok, or maybe it’s the movement of their relics) and recalls something wonderful and familiar from another time and place.

–Our thanks to Andy Watts and Three Ships for the sample!