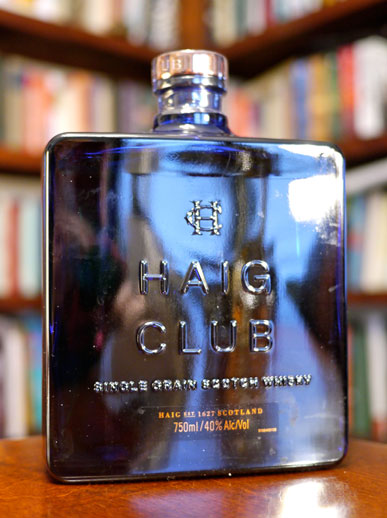 Tasting notes:
Much has been written about this particular whisky and the David Beckham-backed PR campaign that has accompanied it. Many have asked, what does a football/soccer player have to do with single grain whisky that comes in a crazy squat cobalt blue bottle? Others have reacted cynically to the slick marketing and have been hard on the whisky in light of it. We think differently about such things. We see David Beckham as a guy with great hair who fits easily into one of our reviews. Of course, in that review, he’s trying desperately to get his hair to do that thing it’s famous for doing while seated in front of a bulldozer’s exhaust pipe, or he’s trying desperately to turn the knob on John’s gargantuan pepper mill (and no, that’s not a fancy euphemism for something else) to season his favorite tattoo artist before cooking him in during a celebrity cannibalism party from the sequel to Eyes Wide Shut (it was to be titled, Ears Plugged Open). So let the party begin!

On the open, it’s a strange nose, especially at first hit: there’s an off-note that gives way quickly to notes of peppercorns and marshmallows. But these are not just any peppercorns, nor are they just any marshmallows. It’s a clear plastic grinder from 1972 filled with multicolored peppercorns that came of age amidst bell bottoms and polyester leisure suits. And the marshmallows are Extra-Extra-Large Marshmallows a rich city-dweller brought along for the camping trip. And they’ve been burned over the campfire, making them start to flop in the middle and otherwise look like miniature Hindenbergs. Oh, the humanity.

On the mouth, we found prawn stock infused with juniper berries, then used to cook diced potatoes. The mouth is clean, though, clean like bathtub…not gin…bathtub pomegranate seltzer. With pepper, lots of pepper.

The finish is not terribly long, but there’s interesting spice there, and it’s not just pepper: dried thyme and basil from the dollar store. That is to say, the spice is there, but also a bit muted. There aren’t a lot of whiskies we’ve had that have notes similar to the notes we got from this one. One WWF guy (Weird Whisky Fetishist–as in a fetishist of Weird Whisky, not a weird guy who is also a whisky fetishist) I know would be attracted to this one for that reason alone.

But have I mentioned the bottle? It’s a really nice one…for cologne. I kid, I kid. It is quite distinctive, and it has an awesome copper stopper–which, of course, is a lot better than a copper clapper (much less likely to end up involved in a caper).

[Bill: A “copper stopper”? Like a donut shop? Or a brake pedal?]

Rating:
On the scale of strange celebrity endorsements that actually kinda work–
The Haig Club is Penelope Cruz hawking Nintendo’s Super Mario Brothers 2–Not what I would’ve expected out of Penelope, but I now find myself dusting off my old Game Cube and settling in for a night of mushroom hunting as a mustachioed Italian stereotype.
–Stephen

–Our thanks to Haig Club for the sample!