Tasting notes:
The nose is a little slight at first.   It’s like you’re cleaning up after a game of “hide the lemon” played with a toddler and a ferret on the sofa.  Then the two run off to play in a pine forest on a misty gray day.  More pine notes follow.  Pine resin, aged, but still tacky on the bat.  But don’t point that out to George Brett; it’s a joke he won’t find funny.  Or maybe it’s a just-finished yellow pine deck onto which an extra-large Big Green Egg is delivered via crane in time to invite the neighbors over for dinner.

The mouth is delicious.  Flower blossoms added to the top of a bowl over flowing with Honeycomb cereal.  But don’t be fooled.  This is filled with flavor.  The nearest comparison is to nitroglycerin: clear but powerful.  The mouth provides as much interest to my palette as a decerebrated frog to a future biologist with long blond pigtails, blue eyes, and several twisted secrets.  The back end has the sort of flinty bits, or a kind of graphite dust, that leavens the sweetness in just the way I like.

The finish is really yummy.  A friendly druid has found the toddler and ferret and three lemons and, with a surprising economy of words, transforms them into a simple syrup, magical fireball, and a vial of denatured lilac.  You see, it’s all part of a love philtre—unusual on account of its aromatherapeutic benefits—that if taken as directed wipes away regret and paves over remorse. 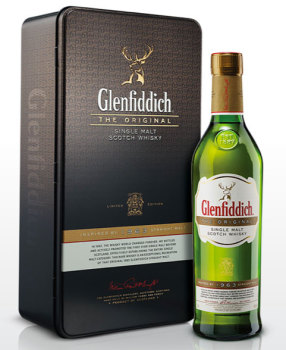 On the scale of love philtres–
The Glenfiddich The Original is Ikey Schoenstein’s–Which is to say, currying favor with the future in-laws with a bottle of Glenfiddich is a winning approach.

–Our thanks to Wm. Grant & Sons for the sample!