Tasting notes:
The nose of the Compass Box Lost Blend slips in quick and quiet, like a mouse donning a kevlar vest before assaying a hunk of smoked gouda cheese sitting on a driftwood trap. There is the standard red wax coating on the gouda, which in this context can’t help but evoke Maker’s Mark, the Groucho Marx mannequin at Madame Tussaud’s, and the Vincent Price horror movie House of Wax. The atmospheric vortex produced by a caramel-coated brass weathervane (of a ferret? no, rooster) spinning merrily in a hot Kansas field. In the garden plot below are kids playing with, and eating, birthday cake-flavored Jelly Bellies. It’s Ronald Reagan’s “Morning in America,” as seen through squinty eyes in the bright sunshine.

The mouth is COMPLETELY different than the nose would suggest. This isn’t a bad thing; it’s like a surprise birthday party. Sure, you thought you were going to an uptown art opening of a hot new artist, but instead, you’ve been spirited into a brownstone brimming with pineapple tarts, loaded with toffee, and whole rooms filled with sand. (I have to say, your Contact is made, the audience gasps, but some of them know the effect is pure effect, and that alone is moving and wonderful.) There’s peat in the woodstove, but not burning, just kinda there like incense, keeping the party thematic as well as surprising. The appetizers at the party are supplied by renegade “pop-up caterers,” who fashion peapods from prosciutto—surprise!—and unripe mangoes 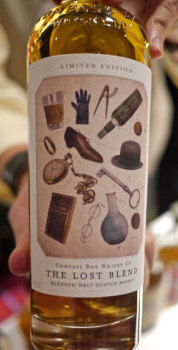 from which all tannin has been alchemically extracted. (Surprise? No.) Stephen got Lapsang Souchong on the mouth, but of course he did…before a giant block of unburning peat squashed him, his tea, and the fruit like the Giant Foot of Cupid squashing the title card during the opening credits of Monty Python’s Flying Circus.

The finish plays out like the flapping of the end of the celluloid of a reel of a film spinning round and round, because the projectionist was passionately kissing her beau. There’s a punch, but not a Mike Tyson jaw-cracking blow; more of a Shakespeare in the Park stage fight. Contact is made, the audience gasps, but part of them know the effect is effect, and that alone is moving and wonderful. A warm flavorful glow engulfs my digestive tract, like a plumber cleaning my esophagus with an umami snake.

–On the scale of good doggerel verse appearing in The Lord of the Rings—
The Compass Box Lost Blend is Bilbo’s line in a poem about Aragorn, “Not all who wander are lost.”–Is that logically equivalent to “Not all who are lost don’t wander”? It doesn’t matter, for the delicious blend is neither lost nor wandering far from me. It is found here, in my glass…until it’s gone forever.

–Our thanks to Robin Robinson and Compass Box for the sample!