Tasting notes:
We understand this is a blend of Sherry-matured and Bourbon-matured malts, along with some grain whisky and some new French oak finishing thrown in there just for good measure. When we heard this, we thought, So, is this then the Great King Street Dump Dram? Or is this like the part of the experiment where the grant money ran out, like that time with cold fusion?

But then we nosed it. No, this is no dump dram, nor is it the product of a loss of funding. Nose it, and you’re more apt to think, Damn, John Glaser was in the zone with this one. It’s the blender’s equivalent of having one of those games where you make every shot you throw in the direction of the basket. It’s bright and floral at first, with apricot ceviche that slowly gives way to the Barber of Seville’s moustache.  We also got notes of a leather strop or maybe shoe leather, like eating cobbler in a cobbler’s shop while you’re getting fitted for a pair of hand-tooled brogues. Give it a little more attention, though, and you’ll find a Sherry mushroom cloud erupting on the nose. But it’s not a bomb; rather, it’s a creative explosion. 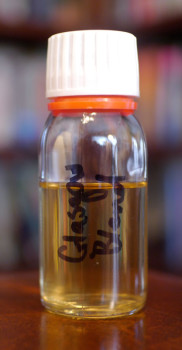 e mouth is a bit thin–pancake-like–but with root vegetables and peat cut with Christmas tree-shaped cookie cutters. But it’s also seriously drying, like a sherry and peat vacuum. Imagine tearing down a wall in an old house and finding an old peat chimney behind the horsehair plaster walls. Now imagine not having to clean up that god-awful mess.

The finish is like a tube sock over the tongue, a lacquered Michael Jordan tube sock that threatens to extend down into the gullet. The peat persists here, but it’s remarkably clean peat. Actually, we’re big advocates of Clean Peat Technology, and this is amongst the cleanest peat we’ve run across. In fact, this has inspired us to look into partnering with Solar City to offer a solar panel/peat furnace combination package. We think it’d be a winner–especially with whisky enthusiasts.

On the scale of iconic Glasgow monuments–
The Compass Box Great King Street Glasgow Blend is the Wellington Statue with the traffic cone on his head–Pictured on the bottle, it’s whimsical and perfectly Glaswegian. It also happens to be the statue (-tory?) equivalent of donning the Grouchos.

—Our thanks to Robin Robinson and Compass Box for the sample!