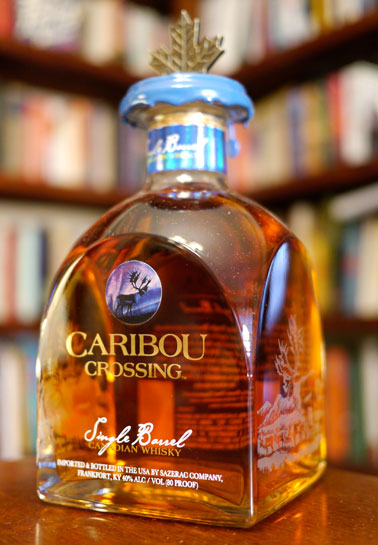 Tasting notes:
The Caribou Crossing opens via a secret decoder ring. By which I mean, the top of the bottle is an awesome pewter Maple Leaf that’s sealed to the bottle via a complex twin-tabbed precious resin choke collar. Stephen attempted to decode the secret of an elegant opening and instead emitted groans befitting a gaggle of angry geese. The nose opens first with a burst of a vintage straight-edged razor being used as an emergency lathe on plastic and wooden popsicle sticks. After that, soft rye and round corn, which yield to burnt popcorn half-popped kernels in a women’s locker room. I recently had some PVW 23, and honest to Pierre, the nose was similar to this. In other words, well played, Sazerac!

On the mouth, John formulated a new theory of Rye-low-tivity: High Rye + Low ABV = Collapsed Clove ball. We nodded dumbly in mute comprehension. There’s also liberal dashes of vanilla on a still-resinous old cedar spice chest that still has old cloves, bay leaves, and tiny handmade Easter baskets in it—no plastic grass yet, but we’re keeping an eye on that.

Bracket the blackened bracken on the finish; a soupçon of Arctic char and a glug glug of Paregoric, eh? Something that you might get served up by Bones McCoy in Star Trek’s sick bay that would cure you of your Rigelian fever. It keeps the spice rolling; the spice chest is repurposed as a dartboard in an upscale pub. The 14 karat gold-tipped darts release unthought-of flavors as they thwap thwap thwap into the triple-20 annulus.

On the scale of pleasant surprises–
The Caribou Crossing is reaching into the Hacking pocket of your green velour smoking jacket and finding a $100 bill that you’d thought you tipped to your hansom driver–Ah, well, his bad luck, but your excellent luck to be able to tip your handsome driver as you tipple the Caribou Crossing on a fine day in the Parc du Bois-de-Coulonge in Québec.

—Our thanks to Jobie Smith and Sazerac for the sample!