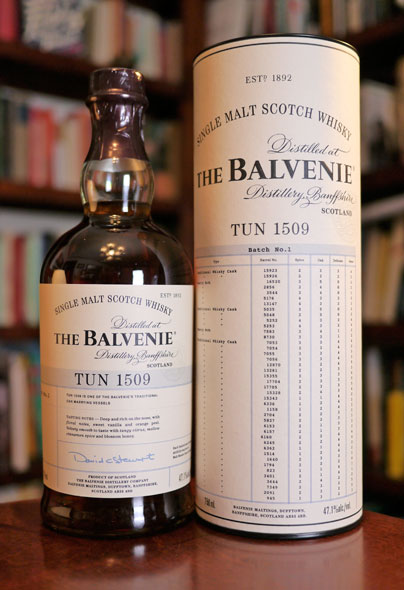 Tasting notes:
The nose on this—

–“I seem to have drunk all of mine.”  [Bill, with a furrow of befuddlement in his brow.].  “What?!”  [John and Stephen, with furrows of a decidedly different kind in our brows].  Grudgingly, we pour out a bit for him from our own glasses and I begin again, but this time with a closer eye on him.

The nose on this remarkable whisky puts me right back in the warehouse in Dufftown where I had my big idea a year and a half ago.  What if a Scottish cheesemonger aged cheese wheels right in the warehouses so that they absorbed that sublime angel’s share, becoming even more delicious, nuttier, and burnished brown in the process?  Genius, right?!

All of this is to say that this is a walk down memory lane with a singular, unmistakably beautiful Balvenie on my arm.  Stephen gets a red fruit note, but youngish.  I agree; think one candy-apple red cherry lollipop stuck among a baker’s dozen of really mature softened plums.  Bill finds a leather note in there.  I agree again; in my mind’s eye I place the lollipop-plum fruit bouquet on leather sofa in the second floor lobby of a Pittsburgh bank.  The nose is no mere swimming hole, but an entire estuary to dive into.  Mermaid massages greet you at the edge of the surf.  Gently squeaking dolphins form an Ave Maria chorus.  Brown bananas eaten by a boy wearing yellow corduroy pants.  “What?” [Bill and Stephen, in unison.]

The sample we received before Stephen scored his bottle (above)

The mouth is stupefying.  I would not be able to liveblog my experience of the mouth without reverting to a series of drooling emoticons.  It’s got that oily mouthfeel that I love.  Not too viscous, but creamy.  Waffles made from Corinthian leather, each square filled with the perfect amount of narwhal musk syrup.  Cinnamon cream sauce reduction pour over pork tenderloin with lingonberries.  These same berries then implode into peppercorn on the finish.  Red dwarf sunbeams glinting off the glass-still surface of a lake.

The finish is badassery of the highest order.  Fiery punch and spice.  Like talking to Freddy Hubbard while chewing noisily on a used John Coltrane saxophone reed.  Old tape, cellophane-brittle and browned, holding together the deed to a property that will make the rest of your days a sinecure.  Dried bananas flambéed with spearmint schnapps and a road flare on a special Thanksgiving episode of Ice Road Truckers.  The ghost of these bananas hang over the tongue and haunt it with spectral insistence.

–On the Yerkes Luminosity scale–
The Balvenie Tun 1509 is “II: Luminous Giant”–What a heavenly body this whisky has! I think that I shall now begin non-elliptical orbit around it.

–Our thanks to The Balvenie for the sample!