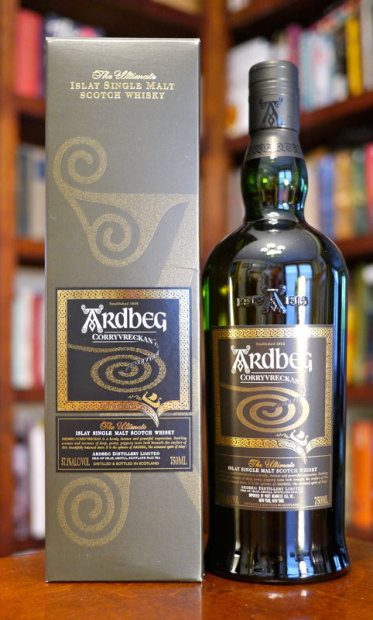 Tasting notes:
Our first impression of this was just smoke: smoke held inside smoke wrapped in smoke, like an airborne particle and gas version of a turducken. For a few minutes, it was like being stuck in a traffic jam in Hong Kong behind a double-decker bus filled with touring farmers and a truck transporting smoked eels. And then stepping into a hole-in-the-wall sushi joint and getting a moray eel unagi roll (it’s got a nice little bite). All of this is to say that it evolved for us from smoke to oil to earthiness to eels. And it kept evolving.

But let me step away from this Whisky Galapagos to note that this dram is a beast. At 57%, it packs a punch, especially at first on the nose: put this with a little yellow cake and a few aluminum rods, and you’d have a WMD–or a submarine engine.

Back to the nose, it’s now moving from eels to seaweed to floral: imagine what it would be like if a wad of kelp were to produce an orchid. Or if a seaweed salad gave birth to a gardenia (and no one batted an eye). If we hadn’t then moved to taste it, I wouldn’t have been surprised if it had moved on to another, disparate set of notes, like maybe a killer red curry made with a Cajun roux. But we’ll never know, because the mouth took us to another place altogether.

The mouth is sharp, bursting with the concentrated, fermented essence of the deep guts of peat. Imagine running into that essence in a burnt out Wampanoag canoe, and you get the idea. There’s also an super-drying smoky brininess reminiscent of the results of John’s ill-fated attempt to make salt biltong (That is, he made it out of salt instead of meat. Ah, the folly of vegetarianism…). I’d say there’s some Sherry dryness, too, but it’s hard to tell, as my tongue is feeling a sudden strong kinship with slugs. But at the last second, a sweetness wafts up from the trail of the liquid sliding down my throat, and it’s just lovely.

The finish is spicy and tingly at first. It tingles more than a team of reindeer jingles. Then the finish goes toward slightly anesthetizing, but in a really good way (as a result, my tongue’s no longer worried about sharing a fate with a slug–nor anything else for that matter). The sensation fires off on the tongue for a very long time. I think I’m still feeling it from last week when we tasted it together. It brings to mind awful puns to get the description just right: it’s like a seven footer from Helsinki (a seriously long finish).

On the scale of bad joke-types–
The Ardbeg Corryvreckan is the groaner pun–I apologize for subjecting you to that one there at the end, but that finish was so mind-bending, it took me there.

–Our thanks to David Blackmore and Ardbeg for the sample!