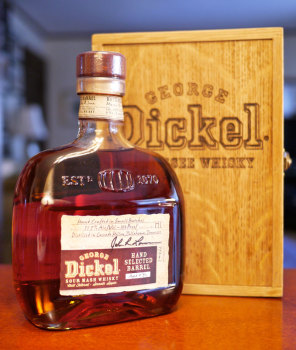 We were delighted and honored to be invited to participate in a promotion for George Dickel’s Barrel Program.  The idea is that we would get two bottles of Dickel’s finest bourbon, the Barrel Select: one to keep (hence the delight) and one to give to someone who shares many of the same traits as the whisky.  Well, since my father really likes corn and is just over 80–

[Reaches for reading glasses]  Ah, I see, the idea is to pick someone who, like George Dickel Whisky, is “Handmade the Hard Way,” that is, distilled in accordance with traditional methods without the aid of computers.  Though my dad has a computer, he still uses an AOL account, so that certainly qualifies.  He also knows about hard work, having grown up on a farm

in Alabama and served his country during his 30-year military career.

The first thing you need to know about my dad is that he thinks he’s the last person who ought to be honored in a public forum.  Another thing is that the whisky he’s holding is so far out of his price range that, left to his own devices, he’d never open it.  My hope is that the presence of the American whiskey drinkers who come to his house to snap some photos of him will change his mind.  Heck, he’s generous enough that he might just give them the bottle.  (Note to Dad: Please don’t give them the bottle!  Thank them for the pictures, pour them a nice glass, and then save the rest till I get down there!) 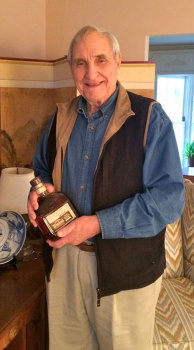 When I told him about this gift and how I’d share some thoughts about him on our blog, it took him a while to warm up to the idea.  The last stumbling block was that he wasn’t sure he could live up to the descriptions of the world’s Most Interesting Man.  Well, he can’t.  Because my dad is a far finer man than that.  You won’t find him sitting in a bar dispensing droll wisdom, or calling attention to himself with stories of a mysterious past.  Instead of words, he’s about action.  Whether he’s serving others in his church community or trying to improve the lives of U.S. military veterans and dependents, this retired Army Colonel always puts other people first.  And it’s his example that stands out to me.  I feel his inspiration all the time, and yet I can’t point to any specific advice that he’s given me.  Okay, that’s not true.  I can think of two maxims that he’s offered.  “Never say a bad thing about another man’s dog” and “Never sit in a cane bottom chair.”  But that’s it.  The rest of what I’ve learned from him has been fro 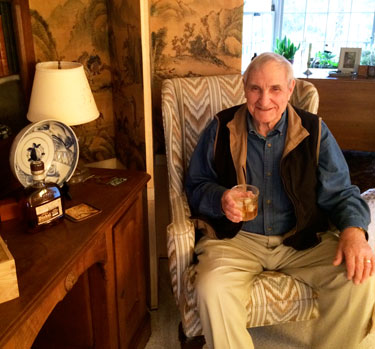 m his example: kind but strong, principled but warm, genuine and without pretense.

I do remember another opinion of my father’s, one he has both lived by and spoken of.  It’s that scotch whisky is for people who put on airs.  Well, I think this blog is living proof of that fact!  But his appreciation for American whiskey—both its taste and its connection to our family history of Scots-Irish immigration—is unalloyed.  I know he’ll enjoy this bottle of George Dickel Barrel Select.  That is, if I can ever get him to open it and not tuck it away for a “special occasion.”


–Our thanks to George Dickel Tennessee Whisky for including us in this program.