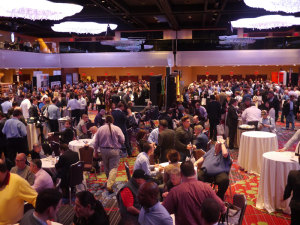 Thanks to several different things falling into place at the same time and a guardian angel named Joan, I was able to attend WhiskyFest 2014 in New York City. WhiskyFest’s organizers moved away from the two day long, separate seminars format they used last year (and the year before that, I believe) and back to the Wednesday night, seminars concurrent with the main event style that I’d experienced in San Francisco and Chicago. Given that the stand-alone seminars were quite expensive despite their jaw-dropping offerings, this move gave more people a chance to experience a seminar. It also had the virtue, to my mind anyway, of taking one out of the main event, where one could really down a lot of whisky in a short time if one wasn’t careful, and into a calmer, quieter, more focused setting where one could sit and enjoy some special whiskies or special pairings or both.

During the VIP hour, I decided to do something I hadn’t done in previous years: seek out VIP pours. Usually, I use the VIP hour to chat with people I want to see. I did that this year as well, mind you, with Wes Henderson of Angel’s Envy being primary among them. Look for our interview with Wes in the coming days (ok, maybe a week or more). The Angel’s Envy Limited Edition Cask Strength is a stunner, and he merited an interview on the basis of that alone. But as you’ll see soon enough, we had no intention of limiting our questions to ones about that expression. 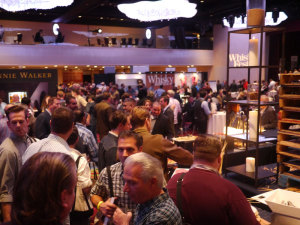 Back to the VIP pours, I also had no intention of waiting in the Pappy Van Winkle line for anything, much less the 23 year old, which was their VIP pour. It didn’t help that the Pappy table had its own cordoning lanes so that people could stand in line for their shot at it. Instead, I enjoyed Bruichladdich’s newest Octomore (though not right out of the gate–I’m not an idiot), High West’s A Midwinter’s Night Dram, Wild Turkey Diamond Anniversary Bourbon, Highland Park’s Freya, the Glenlivet’s Guardian’s Chapter release, Tullibardine 25 Year Old, Yellow Spot, and Benriach’s Authenticus 25 Year Old. I missed a couple I would have liked to have tried, but at least I managed to get many of the ones I hadn’t tried before. The VIP pour offerings were quite good this year, but the Pappy thing was…well, it was the Pappy thing. 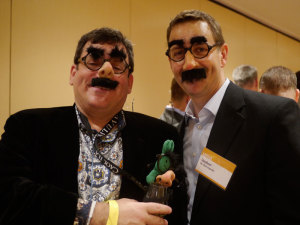 With the VIP hour over, I chatted with a few friends and then man-about-town and whisky collector Matthew Lurin found me and reported that the Mortlach seminar was beginning toute suite (actually, he did not use this term, but I like the debonair flair that gives him and this story). So off we ran to get in line, and along the way, we ran into Greenie McGee and his mindful minder, whom I was very glad to run into again (it had been too long). I think Matt might be the first collector we have photographed with the Grouchos in what is a growing gallery of Malt Impostors with various whisky luminaries. 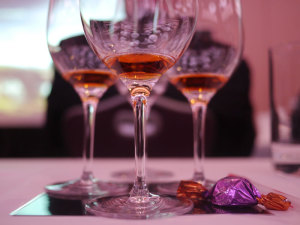 Georgie Bell, Global Brand Ambassador for Mortlach, ran the seminar with grace and aplomb, though I will readily admit that having Mortlach in front of me tends to increase my sense of others’ aplomb. The Rare Old, the 18 Year Old, and the 25 Year Old each brought something unique and gorgeous to the table, but for my money, the taste of Mortlach new make was the highlight of the seminar. But then again, I am a whisky geek and a Mortlach freak. 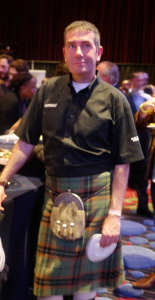 I was sorry to miss Steph Ridgway’s and Russell Woelfel’s seminar pairing Highland Park whiskies with Goose Island beers and the Bowmore pairing with oysters, but again, one cannot do it all, because there’s just too much. So I went for a little food at that point, and found the offerings broad and tasty. Despite my getting John Campbell from Laphroaig to pose in the food line with a “John Campbell is not impressed” look, the lines were manageable, thanks to the multiple buffets in the room. But with some food in my belly to absorb any excess alcohol, I moved on to find some diamonds in the rough, as it were. One that I found toward the end was the Balvenie 25 Year Old Single Barrel. It was supposed to be out at VIP time, but apparently arrived a bit late, and I was thrilled to get to try it later in the evening (in no small part because it was spectacular). 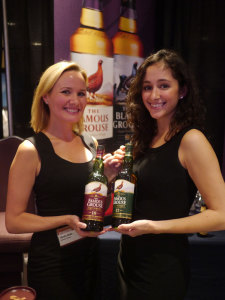 A more standard diamond in the rough was the Famous Grouse 18. I had only ever tried the NAS Grouses, so it was great to have the Grouse’s Nicola Riske (with an assist from Alexandra Ortega) talk me through the 10, 12, and the sherry-forward 18. (I have to say, the 18, which contains no grain whisky, is a crazy good value.) I also thoroughly enjoyed catching up with Danielle Eddy from Hillrock Estate and Dave Pickerell of Hillrock Estate, WhistlePig, and Maker’s Mark fame (the photo credit for the pic of myself and Danielle below goes to Mr. Pickerell). That evening, Danielle became the first woman I’ve ever walked up to reeking of peat who responded with unrestrained envy and glee. I guess I shouldn’t be surprised, given some of what they’re up to at Hillrock Estate (their peated Single Malt being a good first example).

There are assuredly other gems I tried that I’m forgetting or eliding here, but I’ll leave the run-down at this: with this WhiskyFest, the old was new again, and it felt like we were back to the good old days when you didn’t worry that maybe one of your whisky friends had shown up the other night and not the night you did. That said, I still missed people I’d meant to see, but that’s a testament to the sheer size and scope of the event and its wide array of revelries. I’ve written it before: it behooves one to choose wisely.