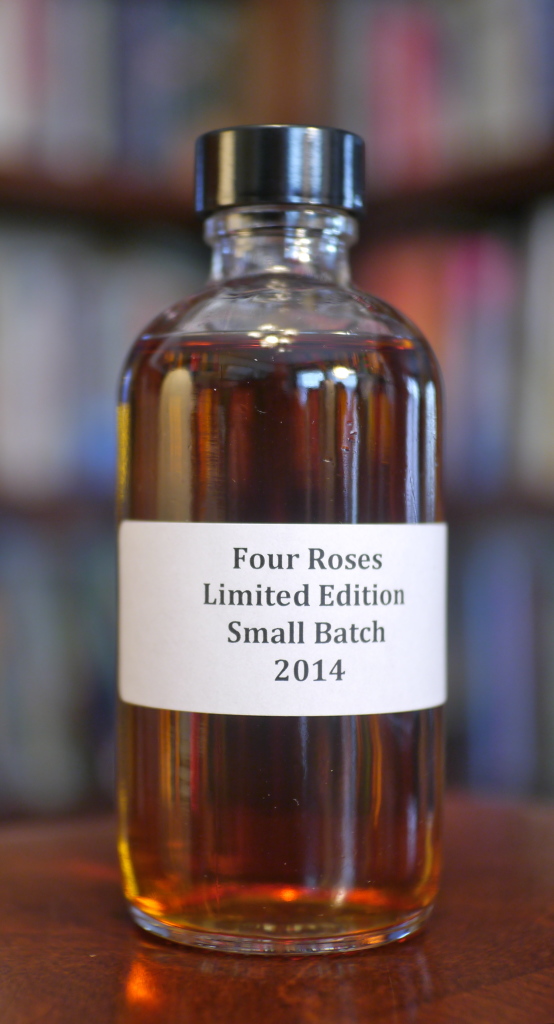 Tasting notes:
The nose of the Four Roses Limited Edition Small Batch 2014 opens, shockingly, with horse tranquilizers, turpentine, and misplaced bedpans. Or, at any rate, so said John, woozily, boozily, deep in REM sleep before Stephen and I slapped the bejeebers out of him. The whuppin’ turned into a tanning suitable for a miscreant truant laid down by an angry schoolmarm, ‘cuz none of us knew what moonshine literal or figurative had gotten ‘twixt his ears to make him so cock-eyed to spew such gibberish. We got perfume—fancy French perfume, mebbe worn by Marie Antoinette, wafting off a cut ripe watermelon, warmin’ in the sun at a picnic. Sure, chilled watermelon might be better for eatin’, but I reckon warm is better for the beguilin’ perfume risin’ up like the Mists of Avalon up yonder on Bourbon Pond. It’s like someone slathered sour cherry juice and sweet peach nectar all over Becky Thatcher’s mom afore a Sunday afternoon nap.

And let’s be clear here: I’m not from the South, I don’t typically elide my verbs, and I don’t know exactly why the aroma of the Four Roses elicited that distinctive vernacular in the paragraph above. Let’s see how I hold up under the influence of actually drinking it. The mouth is warm, with a ribcage of oak and a spine of fervent, but thoughtful, loyalty to the good rich loamy soil of Lawrenceburg, Kentucky. It’s sparkling, like a broad and inviting smile at a tenth high school reunion from someone you always had a crush on. Come hither? Come yon! A segue to a drop of lime and tarragon before moving back to the family house in triumph, having bought it at a discount from the yuppie couple who fancied they’d become artisanal turnip and beet farmers.

The finish has fine leather, like driver’s gloves for the Tesla, and a tannic structure like a honeycomb constructed  in an oak tree by specially bred African pygmy bees. It’s riper and warmer than the watermelon; it’s warm pond on a hot day, beckoning irresistibly. Stropping a Damascus steel Broadwell knife on a deerskin loincloth. I was ready to fight John and Stephen for the right to review this whiskey!

–On the scale of southern specialties enjoyed across the country–
The Four Roses Limited Edition Small Batch 2014 is barbecued pork ribs–That is to say, I’d like to drink it at least once a week, definitely at my wedding, certainly every birthday and anniversary, during football games, baseball games, horse races, NASCAR races, rainy days, sunny days, and everything else in-between. I want it served to mourners at my funeral. Yes, it’s that good.
–Bill

–Our thanks to Four Roses Bourbon for the sample!