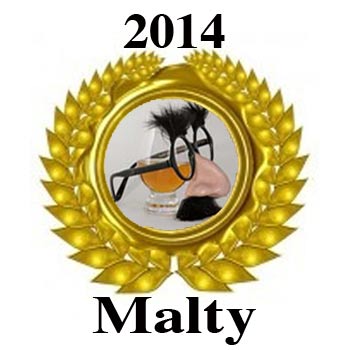 We failed to award The Malty in 2012 and 2013 for reasons that are unclear to us, especially given the material the whisky industry has generated for us. Once again, it seems that we lost sight of the need to award this venerable, yet utterly contrived prize. After awarding the second Malty Award to The Southern Comfort Pepper way back in 2011, we’re back now late in 2014 to announce that the winner of…

The 2014 Malty for Best Unintentionally Parodic Marketing Materials for a Whisky Product goes to:


Unlike the SoCo Pepper, in which there’s some cleverness (though also a bad–and apparently advertent–double entendre), the announcement of this new product, which we’re counting as marketing materials for the sake of this award, was simply awful.  The rest of the marketing materials are just hopelessly sexist in the most annoying way. Taken as a whole, Diageo’s effort here is undeniably worthy of a Malty.

From the press release, as quoted on The Spirits Business website, we get this amazing gem:

“Many people remember that feeling you get when you first taste Grandma’s pies fresh from the oven,” commented Kristin Markovich, senior innovation manager, whiskey. “Piehole is our way of bringing that delicious memory to consumers for any fun occasion and we hope people everywhere will open their pie holes to try these three mouth-watering flavours.”

Oh, the horror. I’m sure Senior Innovation Manager, Whiskey, Markovich is a nice person wholly undeserving of this fate (because no one deserves to have her corporate overlords make her say something like this on the record), but this has to represent the lowest of the low points possible in her career–and that would be true here even if her previous position had been entitled “Fries.” Of course, this could have been Markovich’s idea and she could have said it because it was her own idea that she was proud of… no, no, we just can’t contemplate that any further.

The rest of the marketing materials include the downloadable wallpapers below, which feature a Charlie’s Angels ripoff trio with a Betty Page pinup flair. Because that’s exactly what will make a guy want to choke down some overly sweet and overly flavored “whiskey.” And I’m sure every self-respecting woman will love looking at Sweet Ashley, Sweet Cheri, or Sweet Peggy on the bottle as that woman snaps up a bottle on her way to the cashier at the liquor store. And they put “Feed Your Piehole Responsibly” on the wallpaper. All of this, and we’re giving them a pass on the strained pun. 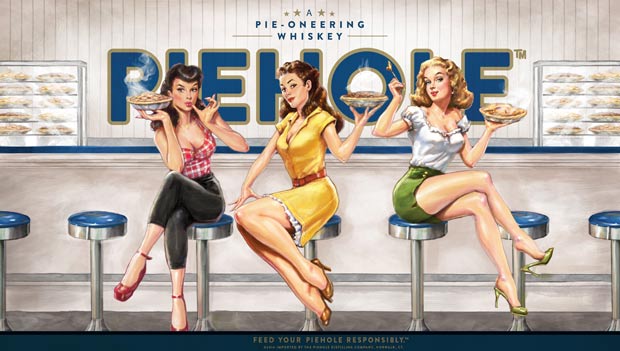 And if you’re dumb enough to want more, here you go: 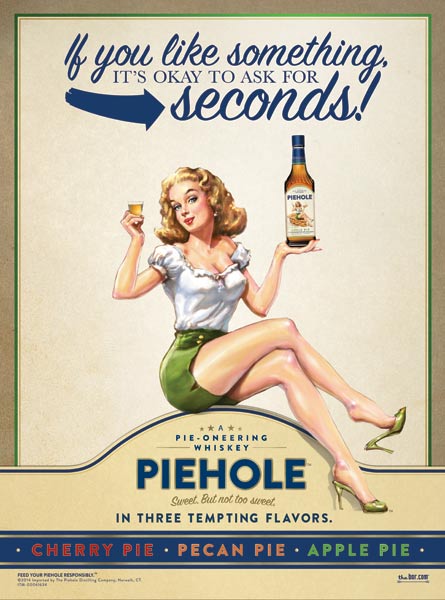 If you view this as another sign of the coming Whisk(e)y Apocalypse, we will not try to dissuade you from that position, because, well, in light of this, we just can’t.