A couple of weeks ago, I was fortunate to have the chance to tour the James Sedgwick Distillery outside of Cape Town, South Africa. Beyond ticking off another box on my “Continents on which I’ve Visited a Whisky Distillery” bucket list, this tour was my first of a distillery that is not yet open to the public. Distillery Manager Andy Watts was gracious enough to give me and my partner a tour nonetheless. Does this mean, as Bill sometimes suggests, that perhaps we are no longer true Impostors? Did the fact that Jonah got swallowed by a whale suddenly make him a cetacean insider? These questions are the stuff of deep meditation at Dharamsala or of philosophical discussion in coffee shops, and not of distillery visit write-ups, so we’ll have to leave them unanswered for the time being. Namaste. 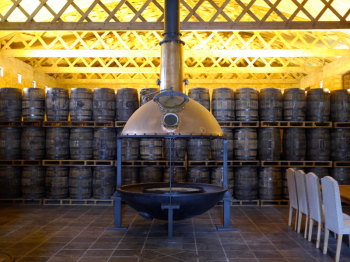 The distillery sits on the banks of the Berg River, and its footprint is quite large–or at least it feels like it is. One thing that adds to that impression is the expansive view of the mountains and the valley from the distillery. It’s an old distillery–dating back to 1886 (and it’s only had six managers in that time!)–but for most of that time, it seems that it produced brandy. It’s been producing whisky since the 1970s and looks to have updated much more recently than that. The distillery looks ready for prime time, with pagodas and a reception hall (with a great fire pit feature made of re-purposed still parts) that could easily be converted to a visitors centre. As it is, though, it’s already an impressive space. Andy told us that plans are in place to open to the public and have a full visitors centre soon, so stay tuned.

The James Sedgwick Distillery produces both Bain’s Single Grain Cape Mountain Whisky and the whole line of Three Ships Whiskies. I put the links in there because many of our readers in the United States will not have come across either brand before. But it seems that Bain’s might be headed stateside before too long–stay tuned for that, too.

Both Bain’s and Three Ships expressions have won multiple awards at international competitions, and once you see the facilities and find out that the Distillery Manager trained under Jim McEwan at Bowmore (among others in the Scotch whisky industry), it’s really no surprise that they’ve managed to rack up all of the medals they have. But Andy Watts has also consciously crafted the whiskies, especially Bain’s and a couple of the Three Ships expressions, to cater to the tastes of drinkers in the South African market. More details on the expressions themselves to come soon in the form of reviews of four different expressions from Bain’s and Three Ships, but for now, suffice it to say that the style is light and fruity with vanilla notes from the high proportion of ex-Bourbon casks they use.

The distillery features a two stills made by Scottish coppersmiths, along with a column still for the grain alcohol distillations (the primary grain they use outside of malted barley is corn/maize). The mash tuns and the fermentation tanks are all stainless steel. There’s a lot of high-end computerization for monitoring and controlling the whole process. I’m no industrial engineer, but the whole thing has the feel of a well-planned, industrial operation. Plus, Andy lives on site and can monitor the processes from his home, in case he needs to respond quickly. That’s technology in the best possible service of whisky making–and serious dedication to the cause.

It’s important to note that whisky matures more quickly here than in Scotland, with a greater angels’ share each year (but less quickly than in India and with a lesser angels’ share than in India). As a result, the whisky there reaches a desirable profile at an earlier age than does Scotch whisky. And though they use mostly ex-Bourbon casks, we did see “Oloroso,” “PX,” “Fino,” “Manzanilla,” emblazened on some butts, alongside some new oak barrels with nothing written on the ends. We also heard something along the way about South African wine casks that got us planning our next trip to Cape Town right away.

At the end, Andy tasted us through all of their expressions, including Bain’s Cape Mountain Whisky and the whole Three Ships line. I was surprised by the bright, light fruitiness of Bain’s, but less so once I learned that it’s matured exclusively in first-fill ex-Bourbon casks. And though I did not expect to find peat in the Three Ships 5 Year Old Premium Select–or in any of the other expressions, for that matter–I was more than pleasantly surprised by that, too. The Three Ships 10 Year Single Malt was probably my favorite, but the Three Ships Bourbon Cask Finish was a sweet and utterly memorable gem. But more on all of those later–watch this space for reviews of each of these expressions.

Really? I had to hold the bottle backwards? Geez…

My first “world whisky” distillery visit felt very comfortable and familiar, in no small part because of Andy Watts brings a sensibility and an easy confidence that I’ve often encountered during my best distillery visits in Scotland. In Andy Watts, Bain’s and Three Ships has a distillery manager and ambassador with the expertise and the charisma necessary to take these South African brands to the next level. Best I can tell, that next level is fully global. So if you haven’t been fortunate enough to try Bain’s or Three Ships to this point, you probably won’t have to wait long, but the wait will be worth it.