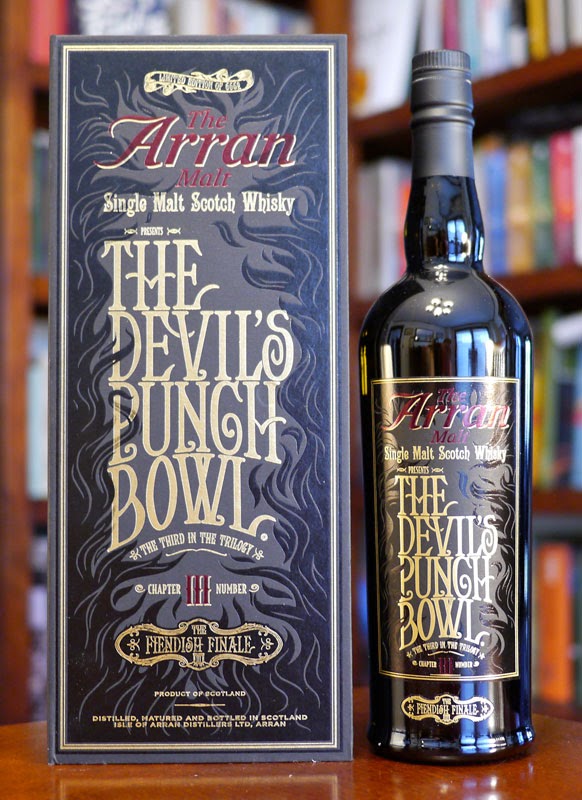 The Arran Devil’s Punchbowl III, the third in the series, is kind of The Return of the Jedi without the Ewoks. Meaning, the first two entries in the trilogy—There are only three Star Wars movies, right? We’ve established that?—had us slavering and slobbering in anticipation for the next installment. I wondered, though, why the nifty packaging didn’t include a Devil’s Ladle, too? I mean, what’s the use of a punchbowl without a ladle? And what would a Devil’s Ladle be made out of—the keening banshee wails of damned souls glued together with tears shed at the funerals of the righteous? And what…

…and thus, I finish my critique of St. Thomas Aquinas’ supposed resolution of the divine tension between the inherent goodness of humanity and the undeniable existence of predatory evil souls, the veritable sharks of humanity. Anyways, onto the review.

Tasting notes:
The nose of the Arran Devil’s Punchbowl III opens with maples and gardenias abundantly lining the path of good intentions leading discursively to hell. It evoked Billy Idol’s “White Wedding” video, for those of you old enough to remember MTV and the 80s. *cough, cough: John* Lilies, minus the sickening sweetness, leaving an undertone of black crepe left hanging at the scene of an All Hallow’s Eve Erotic Witches’ Sabbath, kettle included. Also there are ladyfingers, the dessert-fingers of saintly women who, despite ample provocation, never ditched their wastrel spouses. After sipping it, a re-nosing, which we always recommend, was like the second coat of interior house paint. Being that the olfactory receptors were primed, hints of filberts lightly toasting in peanut oil in a cast-iron skillet coyly emerged, then leapt onto my tongue.
Once there, a brilliant white light, which typically wouldn’t be associated with the Devil. For that matter, neither would Usain Bolt running in tiny ivory-colored velvet slippers, either, but we found those in the nimble mouthfeel. White grape juice, wrung from moon-ripened Chardonnay grapes destined to never age in an oak barrel. Hot golden messes running outdated software from the 1950s on their internal servers. A high golden note, like the glints of fire off a seraphim’s halo—if that seraphim got drunk, then flew aimlessly to the wrong side of the cosmos. After the dawn’s first light, citric notes, an ungodly combination of lemons and oranges. Burnt marshmallows that were denied access to chocolate and graham crackers, leaving an inchoate existential dilemma predestined to be resolved only at Judgement Day.