[With the Ardmore Legacy coming out, we thought it was an appropriate time to review the old Ardmore Traditional Cask, which is set to be tweaked next year.] 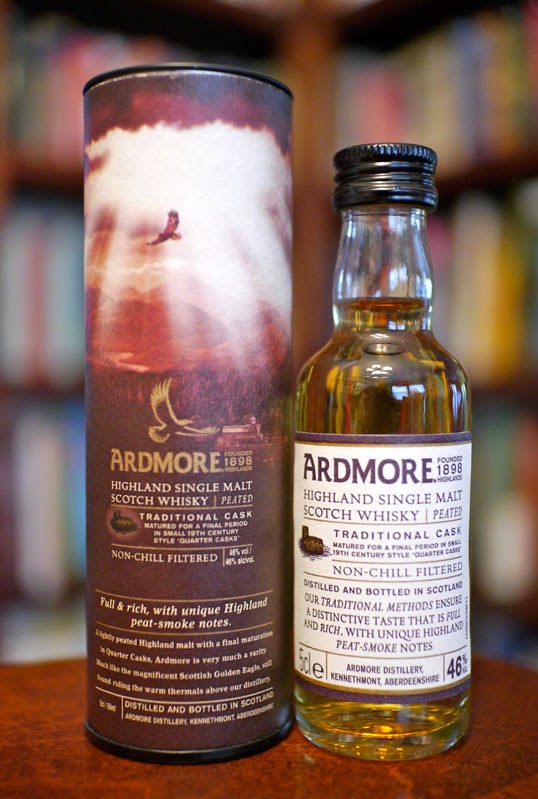 Tasting notes:
The Aardmore Traditional Cask opens with bananas flambée moving rapidly towards bananas flamboyant. In fact, it was like a banana boat, not that kind of banana boat, but a canoe carved out of a giant banana, that’s on fire, producing self-referential power-chorded smoke on the water. That is to say, the nose is a Joycean narrator, but less reliable.
On the mouth, heavily-salted retsina brownies. There’s a high note that goes low, like the tag applied at second base to an imprudent attempted steal. For a non-Islay expression, it’s…pretty darned Islay. Kind of like a Bowmore long-lost cousin, a feral malt that’s long been locked in an attic, forgotten by civilization. Not clear whether the situation is more Flowers in the Attic or Flowers for Algernon: A consensus could not be reached. There’s a light oily peat, a refracted full-spectrum peat, cutting through volcanic ash like a Q-tip through earwax.
The finish is part and parcel with the mouth, an axis that goes straight from sinus to intestines, bringing pleasant peaty fire the whole way down.

–On the scale of Aardman Studio characters–
The Aardmore Traditional Cask is Gromit–Wallace loves cheese just a bit too much, and I don’t think this dram would go well with cheese, except maybe smoked gouda. Gromit is expressive, Gromit is ingenious, Gromit saves the day. Sorry, Wallace, maybe next time.