Tasting notes:
Putting nose to glass with the Benromach Vintage 1976 is akin to stepping into the waiting room of an expensive, walnut-paneled, ficus- and palm-bedecked, sun-lit, tastefully humid atrium of a very expensive and very exclusive Hollywood hospital for celebrities and reclusive billionaires. You’ve heard of the Mayo Clinic? This is the Aioli Clinic. Hydrangeas, Dahlia pistils, macrobiotic persimmons, and a Koi pond fed by Evian water. Endangered amphibians floating on Hawaiian koa wood slack key guitars. It’s accoutred with a mahogany dart board and vintage bookkeepers’ leather-bound (elk) quadruple entry books, guaranteed to have successfully survived at least three ferocious audits by rogue IRS agents. A grouping of Monarch butterflies flutter by, trailing clouds of glory and bourbon-inflected cherry lozenges. The clinic is next door to the neo-classic-early-post-modern-rococo-Mission-style-Frank-Lloyd-Wright-designed Motel 7. (That’s Wright, Stephen: one better than a Motel 6.)
The mouth is engaging like a young Elizabeth Taylor; that is to say, it’s gorgeous, and often getting engaged. Antarctic char (very rare!) served very rare in grilled rosemary-herbed banana leaves. A lemon cream pie disguised as a key lime pie masquerading as a lemon meringue pie going undercover as lime mousse cooling on a black oak highboy. It’s really exceptional; like ordering oysters with Tina Fey at a raw bar on Ibiza and finding the Hope Diamond in yours. (She only got a black pearl.) 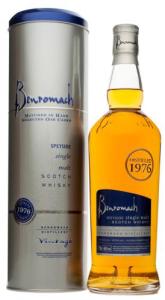 The finish is long, like an extra-innings game on a warm night. It just hangs out, keeps going at it, doesn’t quit, and continually, quietly reasserts itself, like your valet. It’s big, lively, elegant, and understated like a Ferrari chassis underneath a Rolls Royce exterior. It’s kissing Sela Ward on the set of The Fugitive. It’s sharing sunflower-honied cocktails with Zelda Fitzgerald and Dorothy Parker at the Algonquin before they (respectively) went nuts and became fully jaded. And still the finish goes on! It makes happiness happen and mundanity evanesce. It’s being hired as Gisele Bündchen’s very, very personal assistant. The spice builds cumulatively, like dusting flatbread with pimentón  and crumbled crisped olive oil sauteéd sage leaves.

–On the scale of meme-tastic mash-ups–
The Benromach Vintage 1976 is 76 Trombones playing while viewing the Spirit of ’76–It’s so red-blooded Americana that it’s hard to believe it’s whisky, not whiskey! Really, though, what we’re saying is that it’s worth touring on the road with a Broadway company and that it’s worthy of keeping for 200+ years.


–Our thanks to Chris Riesbeck and Benromach for the sample!