Tasting notes:
The Lost Distillery Stratheden Vintage noses like shiitake mushrooms being toasted on the smoldering remains of Robin Hood’s yew bow and Little John’s hawthorn quarterstaff alongside a river of sludgy meandering Graham’s port (1985). Nearby, Allan-a-Dale is juggling Oro Blanco grapefruits from the rubyfruit jungle, while Friar Tuck is cleaning out PVC pipes with grilled corncob pipes. (No one said this would be easy nor that it would make sense.) Rarefied, transmogrified pineapple mists condensing into pulpy liquid, much preferred by Ferrari salesmen to mix with carnauba wax to polish hubcaps.
It’s sizzling on the tongue, as if I’m sucking on lollipops made from pre-LED Christmas lights, sparklers, red hots, and Michelle Pfeiffer’s smokin’ bedroom eyes (circa 1985). After thunder, rain. Although in this case, it’s more like buttered lemons playing at a water park with their pals, bitter celery roots. And if the water was really an Aztec shamanic pulque, but not so sweet. We also got a rhubarb hemlock compote—Socrates reportedly said, “I just ate what?!” There’s a tart-bitter, rindy, burnt pomme de terre thing going on, maybe wrestling with a thick lime fudge? Socrates notably didn’t eat that. Despite my best efforts, not even my prose can diminish the power of this whisky! 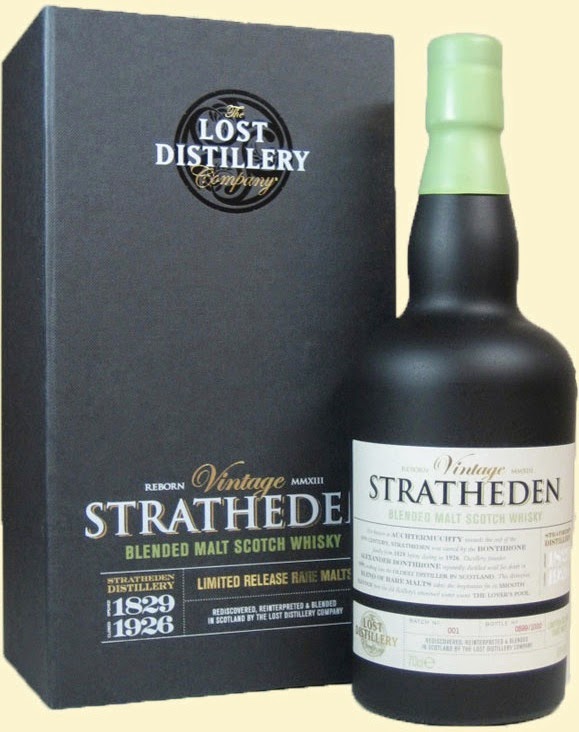 The finish is light and zesty—not lemon zesty; more elfin zesty like a trained poodle ice skating and pulling off a triple Lutz. There is a tinge of bitterness; perhaps the residual disappointment in the militarization of domestic sporting events, the corruption of international competitions, and the fickleness of judged events. It’s smooth as a dragon kite soaring on an updraft.

–On the scale of movies from 1985 that are so damned fun and feel just right for this dram– The Lost Distillery Stratheden Vintage is Back to the Future–It’s vintage, it’s now, it’s a paradox, it’s all good, McFly.

–Our thanks to Jeffery Karlovitch and the Lost Distillery for the sample!