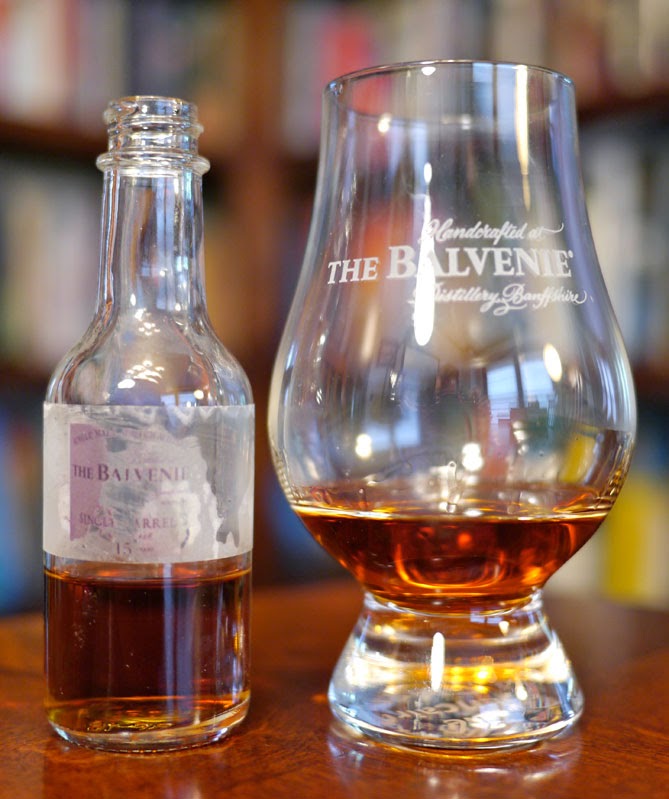 Tasting notes:
The Balvenie Single Barrel 15 Sherry Cask is a dark ruby dram in an otherwise clear tumbler. If we click our glasses together three times, we’ll go back to Speyside? There’s no place like Speyside. There’s no place like Speyside. There’s no place like Speyside…damn, it didn’t work. Cherry Sherry. Pitted bing cherries immersed for months in Sherry until the solid and the liquid form an evolved new state of matter.
The mouth is meal-like, as if astronauts were compressing the repast from the Satyricon into a teflon-coated tangy capsule. (Thanks, NASA!) It’s balanced like eating a Beard-award winning chef’s seven-course meal on a teeter-totter with Gordon Ramsay. There’s prime rib with garlic butter instead of horseradish sauce, and tannic peat underbite instead of a parsley garnish.
The finish is long and smooth, a legato segue sliding into third base on what should have been a stand-up triple. It’s so very very Sherry cherry sherry. I’d like to work in beriberi here, as in, “This dram has been beriberi good to me,” but I fear the reference will be lost. John speculated that the barley was grown alongside the grapes in Jerez, while Frankie Valli crooned and Prince mugged and swooned under a cherry moon. Stephen adroitly refuted this farcical flight of fancy by pointing out we were drinking Scotch, dammit! Finishing the finish was doing long intense vertical push-ups head-first into a Dyson Airblade™. Yes, your head would have to be considerably smaller, but we’re imagining this review is taking place in a “down the rabbit hole” Alice in Wonderland alternate space/time reality.

–On the scale of diseases born of vitamin or mineral deficiencies–
The Balvenie 15 Single Barrel Sherry Cask is wait a second, this is a quandary. I…I…don’t know how to proceed here: If the rating is a really bad disease born of a vitamin deficiency, like beriberi or goiters, does that mean that dram was very very good, or very very bad? It is an excellent dram, and it deserves a good rating. So let’s go with a different rating:

–On the scale of songs in the musical Jersey Boys—
The Balvenie 15 Single Barrel Sherry Cask is “My Eyes Adored You”–C’mon, you knew we couldn’t end with “Sherry.” Too obvious, and this is a subtle dram!


–Our thanks to The Balvenie for the sample!