With coverage you can count on, I’m Stephen from The Malt Impostor, and today we have an exclusive:  The Malt Impostor is the only whisky website to cover Duncan McGillivray’s retirement party in person, because, well, we’re just that committed to covering whisky news for you.  A week ago today, I was fortunate enough to be on Islay and get invited to the retirement party for Bruichladdich’s Distillery Manager, Duncan McGillivray, who retired after 40 years of service to the company. 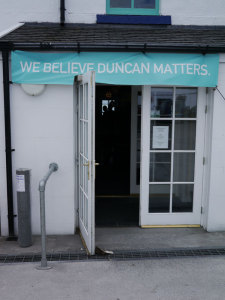 Duncan was an essential cog in the machine that brought about Bruichladdich’s renaissance.  “Essential cog” is an especially apt metaphor here, as Duncan personally retrofitted, rebuilt, refitted, reconstructed, and reattached countless cogs and other mechanical parts of the distillery’s Victorian Age equipment.  Given the shoestring budget on which the distillery operated for many years since its reopening in 2001, it’s a pretty safe bet that the company would not have been able to afford the costly repairs that Duncan’s mechanical wizardry saved them.  And, of course, if the repairs hadn’t been made, neither would the whisky have been made.

Beyond his expertise and incredibly hard work over the years, Duncan was also part of Bruichladdich’s distinctively Islay DNA: he’s a native Ileach and Gaelic speaker, who is regularly featured on Gaelic television and radio programs (BBC Alba, the BBC’s Gaelic language channel, was present to cover the event as well).  He grew up on a farm just up the road from the distillery, and his first job was on the farm next door to that.  And he’s never stopped being a key member of the local community: he lives just down the road in Port Charlotte and rode his bike to work every day.  In addition, with his self-deprecating and soft-spoken personality, he was the perfect complement to Jim McEwan’s charismatic, front-man style.  And as you can see, he’s also a terribly photogenic devil.

The party itself was a lovely little affair, with many members of Duncan’s family and almost all the employees in attendance (those who couldn’t be there sent their congratulations by letter or email).  I was especially impressed with all of the custom banners, posters, etc. that the employees had produced just for the event.  Many employees contributed food for the event, and I think there were at least four different preparations of scones with clotted cream and strawberry jam (or just strawberries) on offer, some of which were better than others, but all of which were quite tasty.  Yes, I tried them all: I’m a committed journalist, and I did what the job required.

A couple of different people spoke during the event, including Laddie Shop manager Mary McGregor, who read an email from Mark Reynier, former CEO of Bruichladdich.  In his email, Mark expressed, among other things, a sentiment in harmony with the last sentence of my opening paragraph just above.  There were a number of gifts for Duncan, including a new bike (and after the event, many employees and Duncan rode their bikes to the Port Charlotte Hotel for drinks) and a special six-bottle bottling of Bruichladdich whisky with a special label.  The event ended with a fine group picture with all the employees there, Duncan’s bike, and a cask head emblazened with what was apparently Duncan’s motto.  Amidst all of the festivities, Duncan was kind enough to be photographed with me (and Content Creation Manager Carl Reavey) in the Grouchos.

Finally, on a personal note, Duncan gave me my first distillery tour in Scotland.  I showed up at Bruichladdich for a tour, and I met this man in coveralls with paint all over them. At first, I had thought he was a painter or a janitor.  But it turned out that he was Duncan McGillivray, and he had been doing some painting around the distillery, just because it needed doing.  This encounter, I later learned, epitomized Duncan McGillivray: if a job needed doing, he did it; and there was no job at the distillery he wouldn’t take on. Duncan took me through the distillery for an hour and a half, answering all of my questions and showing me all the little ins and outs of the place.  It was just Duncan and I on that tour, and it was a hell of a way to be introduced to Scotch whisky distilleries.  Thank you, Duncan, and all the best in your retirement.