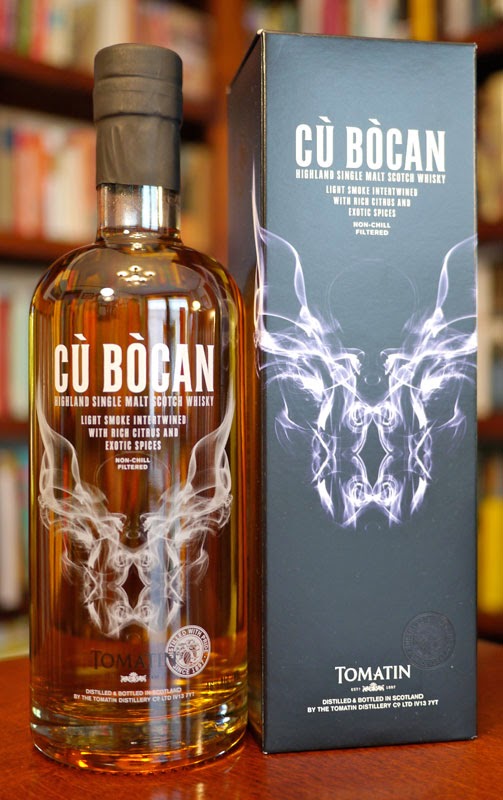 Tasting notes:
The Tomatin Cù Bócan, which means “Totally Crisp Bacon” in Gaelic, noses like a walnut paté complimenting small sour lemons that are hiding in a non-tomato-y meatloaf. “Oh, just look at how yellow and acerbic you are!” The children were notably unimpressed. Also on the plate: a  garnish consisting of a necklace of six fermented pearl onions in search of a fermented molasses cocktail. Put as simple as I can muster: It’s a rich nose pierced with diamond studs that a deranged vegan running amok poured fresh-squeezed bergamot orange/bagoong nectar all over.
The mouth, which I first thought eminently approachable and fruity, offers a bastardized grapefruit of uncertain antecedents, unable to matriculate at Fruitham University in New Yak, New Yak. The real meaning of Cù Bócan refers to a (hopefully) mythological spectral dog haunting the Highlands, and at first, I confess to thinking the name was quite a reach. After letting it sit in my glass a while, though, a real fire emerges (the dog!) that evanesces upon touch (the spectre!).
The finish is long and spicy, like a dinner at the Commander’s Palace in New Orleans. A subtle note of a fine high-percentage of cacao hot chocolate gently inmixed with ground dried Dundicut chili pepper.

–On the scale of old things on top of ramshackle barns that turn out to be remarkably valuable–
The Tomatin Cù Bócan is a weather vane made by master craftsman Shem Drowne in the early 1740s–It spins ’round and ’round, changing my mind with its gyrations, making me dizzy and weak at the knees, and while it might look whimsical, it’s fantastical.


–Our thanks to Jennifer Nicol and Tomatin for the sample!