It’s the motion and the relatively dim lighting that does it, not the drinking.  But that wouldn’t explain how my camera seemed to have developed an affinity for cutting parts of Bill out of the picture.  Maybe it was whatever would be the positive equivalent of the fog of war.  The fog of awe?  No: the fog of greatness.  It doesn’t have the same monosyllabic ring to it, but it’s the right term here.  Hundreds of people, good food, and a ton of whisk(e)y all on a boat.  Make it a beautiful evening cruising around Boston Harbor, and you have a recipe for greatness.  And for some crappy pictures, apparently.  But as my therapist keeps reminding me, I should focus on the positive.  Plus, I can draw with words the pictures the camera butchered or blurred.  Or at least I can try.
To return to the positive, though, the Cruise was less than packed but well attended enough to have a great bustling vibe to it.  The food was, as usual, very good (the miniature Chinese take-out boxes with short ribs, mashed potatoes and a bit of broccoli rabe in them turned out to be the best such take-out I’ve ever had.  And I didn’t have to tip anyone!)  Huzzah! 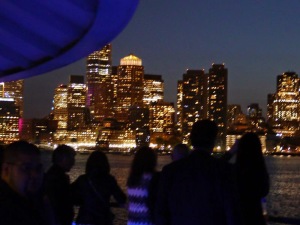 The whisky and the people were usually great (that is, as great as usual–you know, the same way you’d use the term “unusually”?), but the night was not great.  It was perfect.  Granted, this is a matter of the whimsy of weather and not something the organizers can really control (Or can they?!?), but they did move it back to the evening after being in the afternoon last year.  For this prescient move, I give them full credit for the weather.  Bravo!  Later in the evening, we bought cigars at the Julio’s table and went out on the deck to smoke them.  It was truly glorious.  Notice the blurry skyline in the picture to the just above.  The fog of greatness.  And maybe that of a stogie. 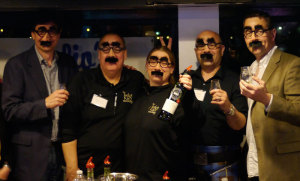 Going back in time Memento-style, at the Julio’s table when we bought the cigars, we thought we’d take a photo with Ryan, Leah, and Roy.  And the camera cut Bill right out of the shot.  If you look close, you can see his hand there on the left side of the picture.  I know, I know: this sounds like a Tom Waits’ song, where the camera has been drinking, not me, not me, not me, but you’ll notice I didn’t take that picture.  Even good soldiers get lost in the fog of greatness. 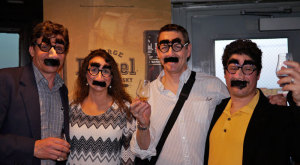 Going back even further, we really enjoyed having Allisa Henley walk us through the George Dickel line.  It was a highlight of the night for all of us.  Allisa charmed us Tennessee-style, and the whiskey did the rest.  The No. 8 was round and sweet, the No. 12 was rich and captivating, and the Rye made me check my wallet to see how many bottles I could afford to buy on my way home that night.  And Allisa was good enough to be pictured in the Grouchos with us.  The camera held up for that bit, oddly enough, but perhaps that was because it was early in the evening.
But since Bill got cut off so substantially in the photographic record of this event, I thought we should give him a chance to insert himself back into this post: 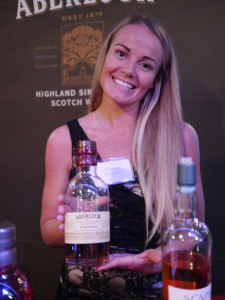 Bill:  Last year, I approached the Boston Whisk(e)y Cruise like…well, the metaphor that springs to mind is a ravenous lion at the peak of his physical powers…who hasn’t eaten for a week and is teleported into a pack of juicy goats, chained to stakes like the one in Jurassic Park. Oh, the humanity! This year, I approached the 2014 Boston Whisk(e)y Cruise like an older and wiser monk, a savvy player allocating his chits for maximal pleasure. The standout whiskies for me were the Nikka Taketsuru 17, which I’d never had before, the Balblair 1991, which I don’t have often enough, the Jefferson’s Ocean Bourbon, and especially the Jefferson’s Presidential Select 25 year old Rye, which was syrupy in all the right ways, as if the Intergalactic Pagoda of Quesadillas required a new topping.  Batch 45 of the Aberlour a’bunadh charmed as well (see pic to the left).  Other delights were pretty much everything at the Gordon and MacPhail table, with the Ardmore 15 a particular favorite. The Lost Distillery offerings were choice, and it was a pleasure to try the Cragganmore 21 and the SMWS 53.199 from Julio’s Loch & K(e)y Society. Oh, and I was tickled by the George Dickel  No. 8. 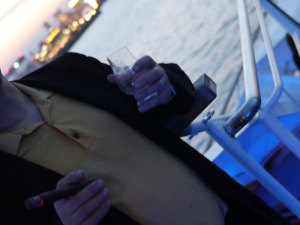 The best moment, though, was at the prow of the ship when Stephen got behind John and held him, arms splayed, wind whisking his hair back and jiggling his Groucho glasses, and him shouting joyously over and over:
I’M KING OF THE WORLD!
I’M KING OF THE WORLD!
I added to the moment by singing on key, “And you’re here in my heart, and my heart will go on…” It’s a shame that that was the moment that the battery in the MaltPhone died and the camera misfired yet again.  It cut off my head.  How I took that selfie with both hands full, though, I’ll never–