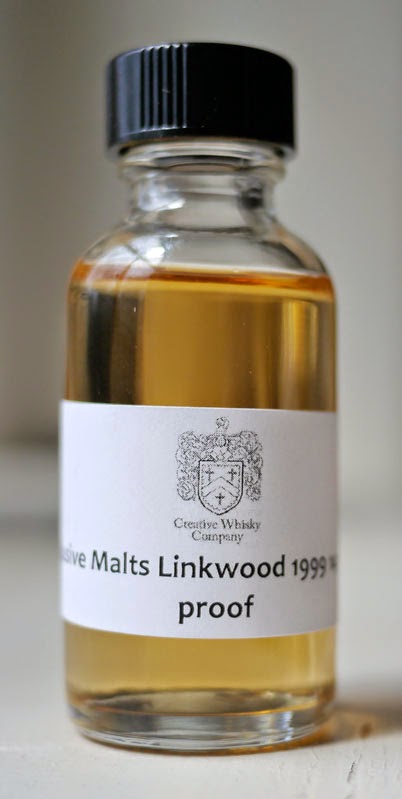 Tasting notes:
Mold under the bark of a birch canoe.  It’s piloted by a mouse sporting offensive Native American dress.  Rutabaga bitters poured into a copper mug.  The truffle you lost in your bed covers, which now dutchovens your boudoir at inopportune times.  All of which is to say, this is a delicious Linkwood.  Thick treacle holding down apricot fruit leather shingles as I drive in roofing nails made from the ribs of the Candy Man.  My glee at the prospect of bringing this delicious dram to my lips prompts my inner Calvinist to sound the alarm of imminent sin and climb into his parapet with a scowl.  [Bill: rolls eyes]
On the mouth it’s the first $30+ PB&J sandwich served in a recently gentrified neighborhood in Ames, Iowa.  Luscious, deep, and just artisanally wonderful.  It reminds me of that high caliber, Swiss deodorant stick that was handed out to me on a Singapore Airline flight where I reclined the seat into a bed so many times I was asked politely to stop.  Alongside the richness there’s also Tabasco fire, gustatory afterburner as if from a spy plane you neither saw nor heard.  Now I’m getting what I came here for!  [Bill: “The death rattle of the inner Calvinist, I hope?”]  No, it’s really serious umami spasms, piquancy and pluck and…

[Editor: John stopped typing for several moment, his hands held above the keyboard in a rictus of unfamiliar pleasure.]

The finish is the gaping hole after one, ear-crackling shell of large bore artillery was fired at the side of a big box store.  I feel like I’m in a James Cameron movie project where the protagonist is embalmed whilst still living and now floats in an altered state where nothing makes sense but all of it is wonderful.

–On the scale of luxury goods whose mere existence inspires desire–
The Linkwood 14 Year 1999 from The Exclusive Malts is this teak wood nut bowl–Brilliantly balanced, both modern and classic, with a perpetual and irresistible invitation to enjoy just a little bit more.