[This was one of the early whiskies we reviewed here at The Malt Impostor, but back then our style was less realistic, more surrealistic, more out there, or maybe just waaaay out there.  We love those old reviews, but they don’t do justice to a lot of the whiskies involved.  Now that we’ve evolved our style and developed our noses, we thought we’d take another crack at some of those earliest ones.  What follows is our first attempt along those lines.] 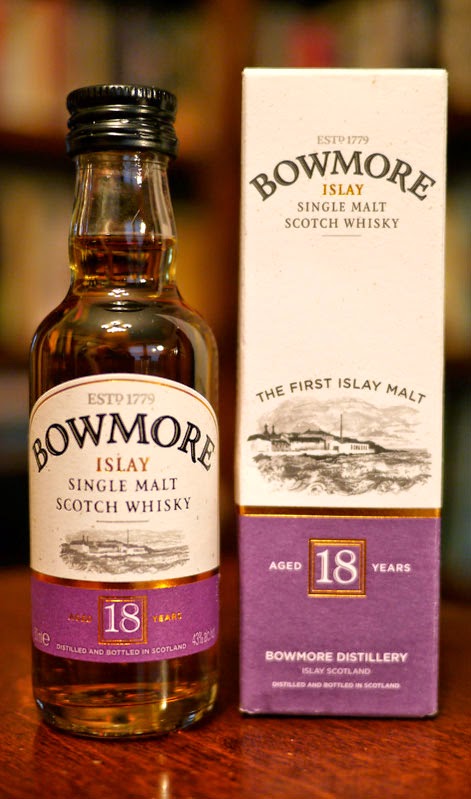 Tasting notes:
The Bowmore 18 is nosylicious, which isn’t to say that it’s up in your grill; rather it’s the olfactory equivalent to Beyoncé-bootyliciousness. Yum. It’s peaty and light and lovely. If it was your best friend speaking to you about an important topic while the two of you were at a movie theater, the tone would be urgent yet soft, imploring yet understated: No one would call an usher, complain, or even make a shushing-sound. There are top-notes of malt cave must with citrus undertones of cranberries congregating underneath, scissor-sharp, yet sheathed in a shearling scabbard.
The mouth is an executive playground for hedge fund/trust fund kids, with teak and rosewood installations polished by the hineys of their personal-assistant nannies and mannies, who, during their probationary periods, continuously climb up and scoot down the slides. Oh, and as a personal favor, between movies, Danny DeVito stops by bringing Angelina Jolie and Jennifer Aniston. A glorious catfight in my mouth—Meow! This dram eschews the mutually assured tastebud destruction of the new-clear-peaty parts-per-million arms race that some Islay distilleries are locked into. Rather, it’s a kind of a prankish cyber-army of kids who watched War Games, hacking the websites you love, putting up presposterous Google doodles, silly headlines, uproarious .gifs, and false fútbol scores, e.g. Lionel Messi scores 18 goals against Real Madrid in a sextuple hat trick!
The finish is a warming peat fire on the patio on cool, crisp, dewy spring night, where the vapors waft in the oak-slatted louvers. It’s like a Scotch and Coke, minus the Coke, but it’s not just the Scotch any longer. A transubstantive change has occurred.

–On the scale of novelty books that should exist–
The Bowmore 18 is Yogic Obedience for Dogs: BowMore and WagLess–Namaste, Fido, namaste. Good doggie! Very, very, very, very good doggie!