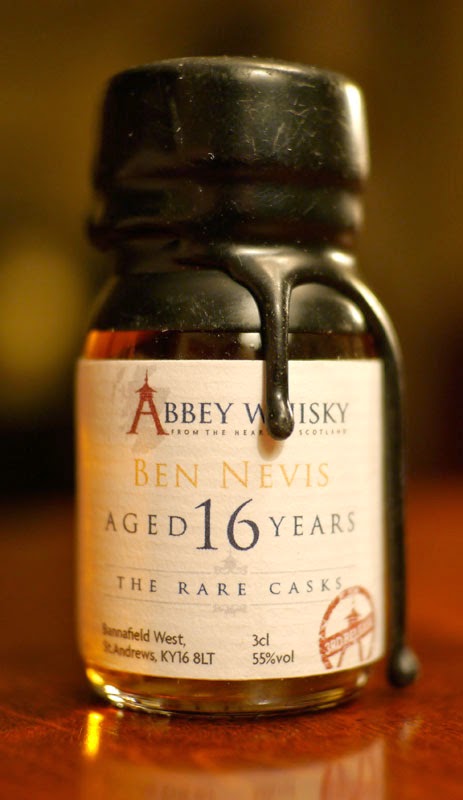 Tasting notes:
What jumps out first about the Abbey Whisky “The Rare Casks” 3rd cask Ben Nevis 16 is the dark umber-y umbra cast in the glass. Port finish? Black magic? Whatever the cause, the effect on the nose is the Bermuda grass the neighborhood bully shoved your face in while saying, “Moo like a cow! Moo like a cow!” Slippery moss and Spanish elm. Whatevs! Clementines, narcissus, and buckwheat noodles eaten for dinner by a guy named Hector who’s standing on a street corner in Hassocks failing to sell “bottled sunshine” to the jaded and suspicious passersby. A veal-calf licking iron-rich water dripping off of a brass organ pipe in a cathedral repurposed as a barn. Beef burgundy reengineered as “Beef grog.” This nose is a 1970s shag carpet remade into ironic toupees. Hair of the carpet that bit you!
The mouth is really thick and deep, like roast mushrooms in a Barolo reduction sauce; a whisky concentrate not in want of water, but maybe looking for a quick hook-up. Tiny letters on the label…jeweler’s loupe: Drink only from graduated medical cylinder.

[Stephen: Bill! It doesn’t really say that, does it?]

Just whip out your jeweler’s loupe…anyways, we also get fern consommé and essence of peppermint oil in a wham-bam-thank-you-ma’am supernova burst. Soil, fungus, night moves, constellations shifting in astronomical tectonic events, and the portal to a really, really, really long finish. John got an MRI on his tongue with the two umami sides lighting up like the brain scan of bisected-hemisphere patient suffering from alien hand syndrome who confabulates all the increasingly inane justifications of his behavior. (Stephen, I’m more than a bit worried about John these days. He hasn’t been the same since his ferret left him for a birchbark canoe.) It’s a Lemans 24-hour finish; and let’s be clear: that’s not a Lamaze 24-hour finish, because that would be belaboring the point. Ouch? Stephen got his tongue basted and roasted like a Tofurkey breast. (It’s odd for me to be the normal one here in the Malt Cave.)

–On the scale of iconic dualist images that are well-understood by Kareem Abdul Jabbar–
The Ben Nevis 16 (3rd cask) from The Rare Casks is the 阴阳, the pinyin, the yīnyáng–They are the light and the dark, the male and the female, the beef and the tongue, the cask and the kidney. It’s an adventure to the heart of reality for those brave enough to hang their old assumption on a skyhook.


–Our thanks to Abbey Whisky for the sample!