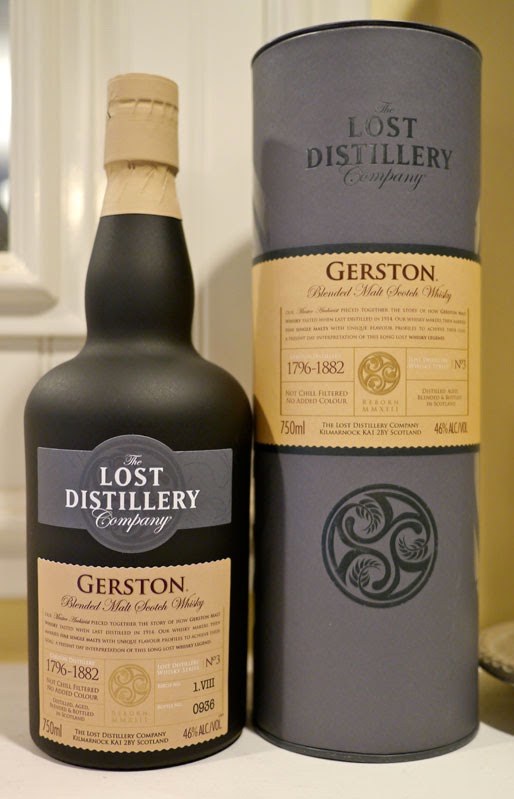 Tasting notes:
The nose of the Lost Distillery’s Gerston 46% abv begins by singing Roberta Flack’s (not the Fugee cover) Killing Me Softly With Your Peaty Hands (an ode to the Boston Strangler?). Or maybe Slapping Me Silly With Your Flippers Clutching Mermaid Purses and Seaweed? Well, Monty Hall, I’m going to ignore those two doors and instead go with Fermenting My Apples in a Winepress (Illegal in Canada Remix). It feels like being in Tuscany with cheap lithographs of Provence decorating the walls while cheese adorns the table; rich Asiago, (surreally) imported Vermont Sharp Cheddar, and Dull Gruyère: Salvador Dulli’s piece “Dream Caused by the Flight of a Bee Around a Pomegranate (and Asiago and Sharp Cheddar) a Second Before Awakening (in Tuscany, Thinking Momentarily that You’re in Provence).”

Hey, thank goodness for editors. Anyways, on the mouth, there’s wonderful sculpted smoke, a sailor’s pipe dream of smoke rings of smoke rings puffing out of whale blowholes. On the tongue, it’s like a perfect 10 fireworks show ending with snatching long kisses in tall meadow grass. Sadly for you, the romantic picture turns out to be a fever dream, and in fact you’ve been burying your face in the mossy exigency of the north side of a banyan tree.

John, stop being so peat-ulant. Anyways, the finish is Gina Gershon wearing a wasp’s nest bikini bottom made from tiny reeds. It’s the hot appetizer at a prominent Asian (Con)Fusion restaurant. It’s peat transmuted into a leather-banded torpeat-o cigar—and while some cigars are only cigars, this cigar (like Magritte’s infamous pipe) is NOT a cigar. It is, in fact, not a cigarillo smoked by a dry iguana; it’s peat formed from palm fronds from a green roof on a white adobe house in Arizona that collapsed under the weight of Sting’s Dream of the Blue Turtles.

–On the scale of TV show exploitation flick art-house Oscar-bait mash-ups that we’re begging for–
The Lost Distillery’s Gerston is Spring Breaker’s Lost Requiem for the Dream of Gerston Gone Wild–Sure, it runs long, the plot’s confusing, and the script is R-rated, but the cinematography is smooth and elegant, and the Smoke Monster is peat-tastic.

–Our thanks to Jeffrey Karlovitz and the Lost Distillery for the sample!