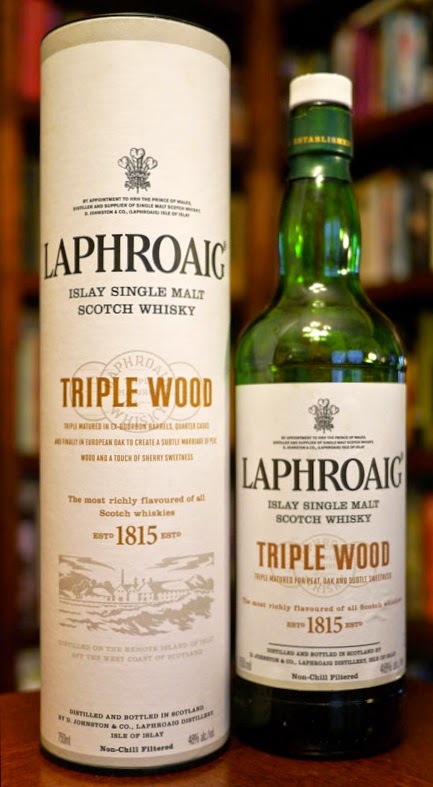 Tasting notes:
On the nose, the peat is integral, integrated, integrizzle.  It’s a groundbreaking theory of whisky, Peat as Integrity.  The peat is rich and fruity and peppery and meaty all at once: it’s farm raised, fruit fed beef served with a glass of muscatel.  Or maybe it’s a balloon misted with muscatel and used by Neil deGrasse Tyson to explain an expanding universe.  And it’s in his colon.  And thankfully you’re not: you’re watching it from the trailing pill capsule camera.  But suddenly the Big Bang transcends 12 year old boy metaphor to yield a different kind of truth for you. It’s like chipping over a sandtrap from a loamy berm (which reminds you of Loam E. Berm, winner of the 1915 Open). Overall, the nose is a Three Musketeers thing: three become one. [John: “You couldn’t have thought of the Holy Trinity?”]  Nope, this is three scented fops jumping about and kicking some ass.
The mouth is really good, if not slightly thin, but also creamy and rich, oddly enough.  It’s a runny Camembert chasing Usain Bolt.  Or maybe a cow on diuretics.  It’s also sparklingly, foamingly bright in the mouth, yielding an additional level of creamy on the palate, like swilling Pepsi as you finish a Mentos®.  Or gargling hydrogen peroxide as a poor man’s version of Crest Whitening Strips™.  Overall, the mouth is exceptional and exceptionally balanced.  Oh, and the legs in the glass look like someone’s making a snow cone.
The finish is crazy complex and wonderful, as though I’m tasting the astral signature of a death match between a Rubik’s cube and a lava lamp.  There’s also essence of black peppercorn that’s been turned into an oil, into which one has dipped cigarillos. Finally, the finish affords a fully felicific feeling.  No, not syphilitic, it’s felicific: that is, well-being inducing.  And that is high praise indeed.

–On the scale of felicific feelings,
The Laphroaig Triple Wood is eating Memphis barbecue (BBQ)–If you’ve ever eaten it, you know. If you haven’t, your life is just that much more impoverished than it need be. Oh, and this dram would go really well with Memphis BBQ, making this perhaps the greatest circular rating of all time.