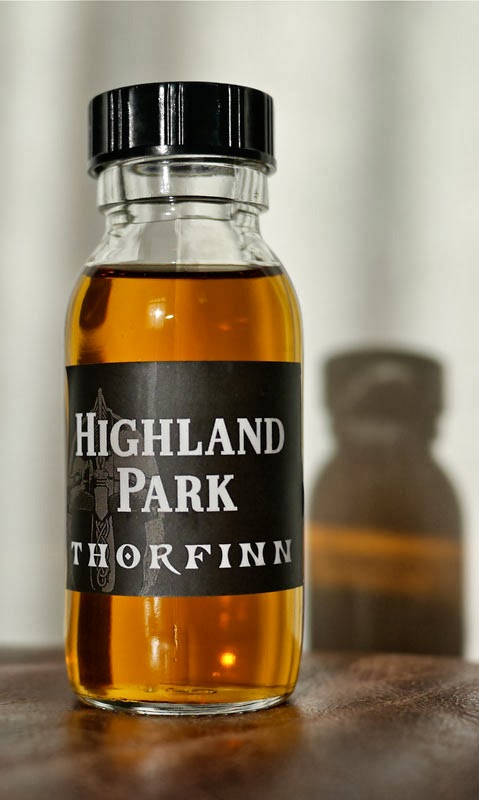 Tasting notes:
Let’s just make it clear from the very beginning.  If Highland Park had begun distilling 1000 years earlier, none of the Nordic warriors would have gone anywhere after arriving at Orkney.  They would have stayed right there, sawn their mighty longships into staves, beaten their swords into barrel hoops, and made bungs of their pommels.  But alas, they lived in a world without whisky.  No wonder the namesake of this fine expression was given the title “Skullsplitter.”  Who among us would not rage and carry on violently under such conditions?
This dark, almost murky dram possesses a stupendous nose.  I’m in the exclusive back corner of an exclusive club called The Florist in South Beach.  It’s the VIP section with bottle service and access to all the best non-indigenous endangered flowers, and I’m right under a pair (!) of Queen of the Andes plants in full, once-every-century bloom.  On the menu are chunks of dripping beeswax kissed by the smoker held in the left hand of the harvester this morning.  Oh, look!  Here’s a chunk from bees pollinating maraschino cherries and blood oranges that I think I’ll try!  Our waitress has a garland of flowers in her flowing brown hair and I lean back in my seat to smell it all.  Dark, dew-heavy roses crowd into my nose, and I feel I’m almost slipping and I’m pulled into a Sea of Flowers by…

…several bouncers, who toss me unceremoniously onto the street.  After I threaten them with a promise to write a thorough account of their “fancy” club in my Yelp.com review, I’m moving to the mouth.  Resin.  I’m getting a really fine resin note, the kind used to condition the bow hair of an angel’s violin.  I like to imagine that the tall and mighty Thorfinn Skullsplitter became a pacifist, sticking roses into scabbards in protest of the upcoming village raid.  It’s so smooth, it’s wood polished by the cherubic bottoms in a Renaissance painter’s imagination.  Baling hay woven into a trivet, on which a clear glass baking dish sits holding the crust of the very best cherry pie ever made.  It is redefining my tongue.  It floods me with an overwhelming sense of wellbeing as I turn, fat with contentment, to poke at burning coals in the fireplace.  The finish is stunning.  It’s a soul-splitter.  My psyche is atomized.  This is a whisky for anointing saints and baptizing messiahs.  More cherries, this time a Hamaguchi cherry mezzotint, bananas in a Rembrandt painting, stolen in the early 1800s by an import/export baron seeing it in an estate of his rival.

–On the scale of famous tracking shots—
The Highland Park Thorfinn is the three minutes and twenty second opening to Touch of Evil–In this 1958 film directed by Orson Welles, the opening scene is a suspenseful, technically masterful, and finally explosive.  A perfect way to capture this classic and edge-of-your-seat whisky.

2 Comments on The Highland Park Thorfinn