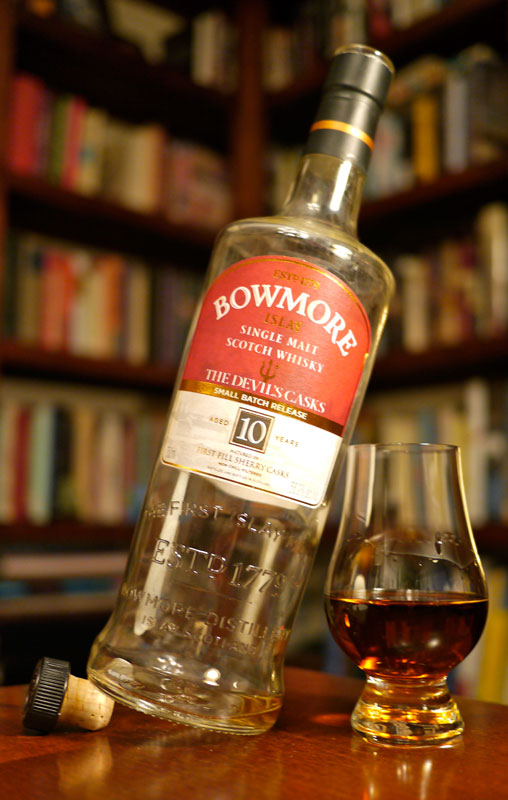 Tasting notes:
This is a right peaty beast!  We’re going to need a bigger boat!  Despite all the sherry in there, still the peat pervades without anything to mediate it.  It’s like a bully whose parents never taught him to play nice.  But this is the kind of bully you let catch you, almost hoping that he would throttle you just so that you’d feel something, anything.  The nose offers a similar invitation, blending curiosity and menace.  The ice pick used to kill Leon Trotsky.  The chalice from which Rasputin drank.  Lizzie Borden’s hatchet.
Big peat on the mouth.  I reach above my head to feel the “Blammo!” and “Pow!” I’m sure are written in bright colors and enclosed in jagged, orange circles.  There are devastating levels of sherry goodness on the mouth.  Not quite umami, this is the sixth taste, “oh, mama!”  This is like the smell in the air after a NASCAR victor spins out in the infield, white plumes of smoke peppered with chunks of grass, soil, and rubber tire.  But in this race the car is on an infield of malted barley spray-painted with images of the Kama Sutra.  It’s Banksy’s biggest installation to date.  The tires are made of the darkest fudge.  Fruit syrup poured into a hollowed acorn shell and carried by an arctic fox wearing a vest.  Green tea used to rinse the coat of an agoraphobic badger after a visit to a waxworks museum.  On the open, it’s vulcanized rubber, or rubber wristband on Vulcan.  Live Long and Bowmore.  The long syrupy finish spreads it out like a buffet line in Morrison’s Cafeteria in Mobile, Alabama.  A hammer before, now it’s an 88-key piano played expertly. Still peaty, but with much more to offer in addition.  Like an unforgettable three-hand massage at a four-star resort for a five-star general, this whisky is memorable.  Our glasses were so peaty, we turned them out into the yard to ward off the crows.  Days later the garden looked like the Dakota badlands.

–On the scale of comedy routines by Victor Borge–
The Bowmore 10 Devil’s Cask is Inflationary Language–Here he increased numbers used in statements by one digit (four became five), even when the “numbers” were merely embedded homophonically in words (wonderful become twoderful, tonight became threenight, go forth become go fifth).  There exists a website that will inflate your language for you, and so in tribute to the incomparable Borge, I shall now amend part of my review to read: “A hammer befive, now it’s an 89-key piano played expertly….Like an unfivegettable four-hand massage at a five-star resort five a six-star general, this whisky is memorable.”

–Our thanks to Jay Scenti and Morrison Bowmore for the sample.