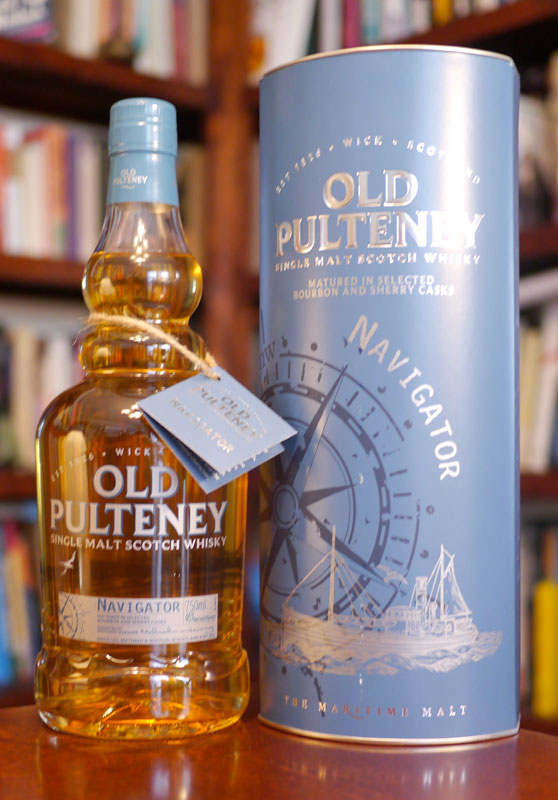 Tasting notes:
I’m a big fan of the oily Old Pulteney expressions.  In part I envy their short journey up the squat still, lazily sliding down the arm into the spirit safe.  In addition, the character won by that journey has the flavors I really love to find in Highland malts: burp-free Omega 3 fish oil capsules, apricot baby food, and machine oil spilled furtively on a maple box by a disgruntled shop class student.  I want to take these flavors and just marry them into a marmalade.  Then, to continue the dream, it is spread on melba toast by a woman named Melba.  Who was born on Elba.
The Navigator will inspire new dreams.  The nose opens after a while to orange and macadam (a Scottish invention).  Waxed citrus fruit, says Bill.  No?  Oh, I understand now.  He whacks citrus with a rubber mallet studded with white pepper corns.  Grapefruits left in a crab trap but failing to attract anything but sea cucumbers.  Runny on the mouth like an unripe Camembert smuggled in a fanny pack on an Air India flight to Chennai.  But it’s really flavorful with more grapefruit, tobacco, pepper powder, and a roving band–dare say I, gang–of young men blowing off steam after their final exams at cosmetology school. Lemons in a tagine prepared tableside at The Tangiers in Minneapolis.  Long spicy finish.  Tobacco with extra tar dipped in molasses, cinnamon extract, and Gold Bond® medicated foot powder.  Seaweed salad dressing spread on a ceviche of sea cucumber to the delight of gastronomes and garden gnomes alike.

–On the scale of delights in Wick–
The Old Pulteney Navigator is the £1.99 malt of the month special at Weatherspoon’s–We calculated that even with the meager 25 ml pours, you could reconstitute a full 700 ml bottle of some whiskies for less than their retail value.  Next time I’m back there, I’m turning the reverse switch on my Whizzinator and starting a smuggling operation!

–Our thanks to Brian Johnson and InterBev for the sample!