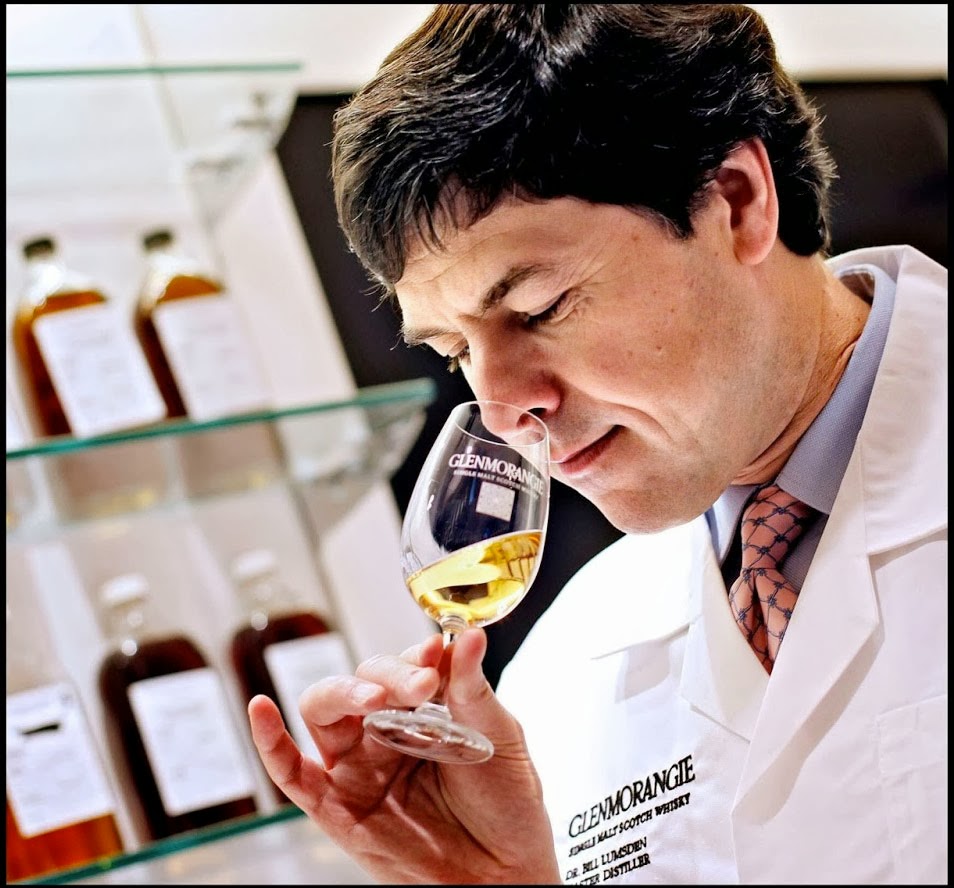 MI: First of all, what kind of Doctor are you? Psychiatrist? Osteopath? How does that help you make whisky?

DBL: I am, of course, a ‘whisky doctor’……  but, seriously, I did a PhD at University, so I guess a biochemist is the most accurate answer….  and, does it help me make whisky??? Well, it certainly doesn’t hinder me……!  But what really helps me more than anything is the fact that I actually love whisky (sounds an obvious pre-requisite for the job, but you’d be surprised….!!)

MI: So, you’re a real, PhD chemist?  Well, Walter White was a chemist.  Walter made 2400 pounds of meth worth $40,000 per pound during one three month period.  Since you clearly have the same talent and ability, we assume that you’re making $32 million dollars per month (roughly) as well.  And if not, why not?  Wouldn’t Glenmorangie Blue, like, totally rule in Albuquerque?

DBL: It’s an interesting thought, but, of course, my contract states that I am only allowed to work on official Moet Hennessy work (c’mon guys, you didn’t actually think I would admit to my ‘sideline’, did you?? Damn, I’ve just gone and done it now….)

MI: We’ve admired the television ads for Glenmorangie featuring you and the famous stills.  How do you get the giraffes to stand still long enough so that you can get the proper cuts for the heads, hearts, and tails?  Wait…you’re not actually distilling inside of giraffes?

DBL:  2 bottles of Original each, easy!

MI: (Our) Bill likes to listen to 70s rock albums backwards, searching for secret messages.  That’s by way of background.  So, “Sixteen Men of Tain,” a rather obscure locution, is actually an anagram for “Matinee Tennis Fox” and “Neat Feminist Oxen” and “Fannies Meet Toxin.”  Care to explain?  We have our theories…

DBL: I love the ‘fannies meet toxin’ one, but am struggling to find the letter ‘f” in sixteen men of Tain……. and I did NOT bury Paul. Although I did knock him to the ground by accident in LAX airport in 2012……

[Editorial note: When we first saw that response, we thought, Where did we get the “f”, then?  We were confused.  John tested and re-tested his anagram generator.  Then we realized that it was in the “of.”  Ah, the power of authority.  We’re just glad he didn’t tell us to shock anyone…]

MI: You’ve achieved great renown for your experimentation with extra maturation and wood management.  Have you tried finishing whisky in something different, like an olive oil cask?

DBL: Yes, but a) the whisky sucked, and b) the SWA were not happy……
MI: Can we expect a Glenmorangie/Ardbeg blend? It would be simultaneously elegant and fiery, and it could be called “Glenburgie.” Or, “Ardmore.”

DBL: To call one of my whiskies by either of these venerable names, I would have to try really hard to reach, ahem, a very particular quality standard……
MI: We understand that the next Private Edition whisky, thanks to the Cask Masters program, will be called “Taghta,” which means “chosen” in Gaelic.  We also understand that’s pronounced “tuh ta” or “tuch ta.”  We think that’s much better than the name of the special Bunnahabhain expression, which is “Toiteach” (and which we can only imagine is pronounced something like “twat itch”).  Are you as embarrassed as we are for Bunnahabhain that they have an expression called that?

DBL: They have clearly never heard of Canesten anti-fungicidal cream, which deals with the majority of such itches….
MI: After allowing fans to pick the whisky itself and then its name, both via the Cask Masters program, this last step was to allow fans to have input on the packaging designs for this upcoming expression.  Is the next step in the Cask Masters process to have fans choose the price of the whisky?  Or perhaps the relative shelf position it will occupy in liquor stores?  We would like to be able to choose these things.  Or at least have some input.  Oh, and also on whether or not Scarlett Johannson will drink it with us.

DBL: Sadly, our friends at Moet & Chandon champagne have already secured the services of the delightful Scarlett……

[Editorial note: Sadly, it does not seem that the ads Dr. Bill is referring to here are ones that show in the United States. Actually, make that double sadly.  For us.]


MI: And finally, what’s the best dirty joke you can tell us that David Blackmore will allow us to print?

DBL: How can you tell when your sister’s having her period…..  Whoops, David’s already censored the shocking punchline!!

–Our thanks to David Blackmore for arranging this interview for us.  But not for censoring that last bit.