Tasting notes:
The Laphroaig Cairdeas 2013 is a limited edition developed for the 2013 Feìs Ìle, but crafted in batches big enough and distributed widely enough that those of us who did not attend the Islay Whisky Festival can not only experience it, but buy one for ourselves.  In a market that has seen increasing numbers of nearly impossible to obtain limited releases, we thank Laphroaig for creating an expression that’s more accessible in terms of finding it in the marketplace.  How about accessible in the other sense?  Well, to start with, it’s pink.  But it’s not accessible in the way that most Rosé wine is.  And for that, we thank Laphroaig as well.  The nose opens with smoked peaches, or maybe a prize-winning giant Georgia peach that was preserved for posterity by shellacking the bottom half, sticking legs on it, and using it as a firepit.  There’s also the smell of a fall night, sweet leaves on the ground, mulled cider and mulled wine, hay bales, and headless horsemen. [John: They prefer the term cephalically challenged horsepersons.  Or at least that’s the word in the forest.]  The mouthfeel is just on the right side of viscous, but not all the way to syrupy nor to oily: it’s the umami of fluid dynamics.  The palate presents notes of wood not yet burnt, a port soaked sow’s ear being actively enjoyed by an old hound who just had his teeth cleaned, and an anxious alligator at a Cajun festival licking an apple. 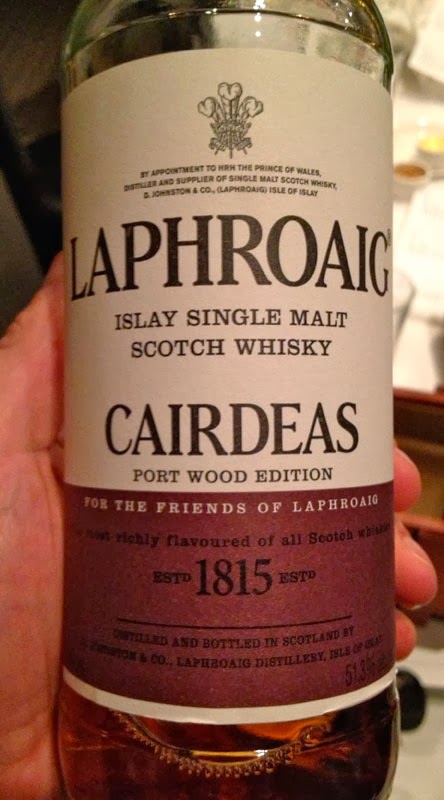 The finish also evokes Cajun spice (no alligator this time), but also fruit in compote–and thankfully not in compost.  And the finish is drier than a Hugh Laurie tweet.

–On the scale of exotic ports (of call)–
The Laphroaig Cairdeas 2013 is the Maldives—
Exclusive, undeniably beautiful, but also directly threatened by rising sea levels.  If you have the means, get out there and experience it while you still can.