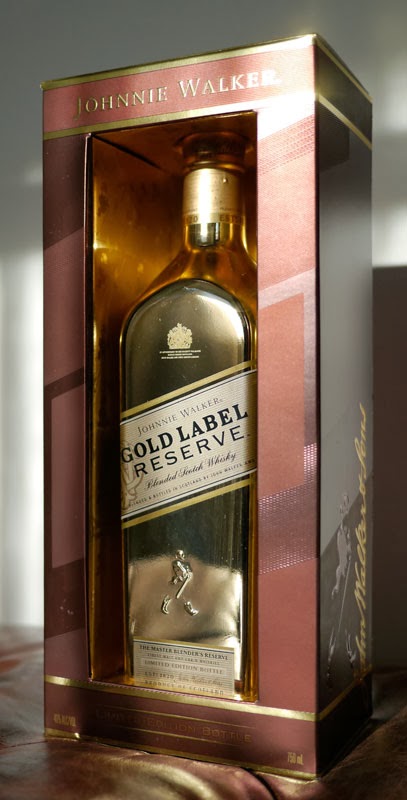 Tasting notes:
The Johnnie Walker Gold Label Reserve nose opens with a cloved orange put between graham crackers by a color blind person who thought it was a marshmallow. Either that, or the orange was trying escape an ignominious fate of being cloved by a stolen sword blade made from the Shirahagi meteorite, or perhaps more prosaically, to avoid being thrown in the pot with the Christmas ham. Regardless, we also get pineapple butter whipped in a copper mixing bowl by a dominatrix making an upside-down cake for her client dangling in gravity boots. Green peppercorns in a brass grinder being ground by Goldfinger onto James Bond to make him sneeze. A banana orange creamsicle preserved in the wine vault of King Midas.
On the mouth, smooth with fire, like a suave Keebler elf on a coffee break smoking an e-clove cigarette, blowing chocolate chip shaped e-smoke rings, impressing a visiting Selkie from marketing. Black oak plank-grilled whitefish served on pewter plates with persimmon wedges. Incense burned by the Dalai Lama’s acolytes to purify your newly-constructed cedar smokehouse. Keebler elves juggling bottle caps that had been fruitlessly used as ashtrays for e-cigarettes. Stephen found also the Pillsbury Dough Boy being roasted on a spit, basted with banana juice, but John dissented, instead proposing cheeseless gougères. We remanded Stephen to the authorities, who put him in armed custardy.
The light buttery flowery fluttery mouth segues beautifully to the finish. It’s not a race to the finish so much as a gentle rocking descent, like a maple seedpod slowly whirling to the ground. Lace doilies with an evanescent lemony furniture polish yielding to the last notes of taps heard fading away from over the hillside.

–Our thanks to Alex Conway and Thomas McHardy and Diageo for the sample.
HAPPY BURNS NIGHT, EVERYONE!