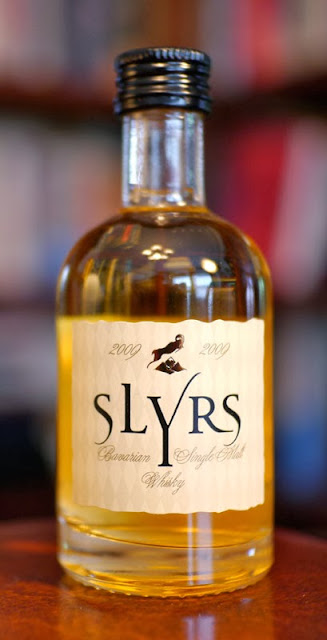 Tasting notes:
The Slyrs 2009 opens a bit funky, a bit janky, like a In Living Color parody of Monty Python’s “Cheese Shop” sketch that exists only in my dreams: Young edam, aged edam, raclette, and red wax taken from Maker’s Mark bottles and melted onto adolescent gouda that dreams of being brie baked in casaba rinds, celery salt, cranberry sauce and Pepsi™. The cheese is complementary to main course: an acorn nutmeat vegan pie served to disappointed Kiwi tourist. Dusty wooden gears, like the innards of your great-great-great-grandfather’s Schwarzwald Kuckucksuhr that hasn’t been wound since 1967, die Sommer der Liebe.
The mouth runs thin to pleasingly plump like a before-and-after picture of a cure for anorexia. Sea water and Worcester sauce™, used to brine double Gloucester. It’s somehow very tactile, but devoid of taste, as if Dr. Funkenstein and Bootsy Collins rewired your neural circuits.
A not unpleasant bitterness on the finish. The Treaty of Versailles? The NSA tapping your phone line, Chancellor Merkel? No, more the transmogrified hops from an Oktoberfest bier taking a vacation in Iceland.

–On the scale of German Expressionist painters–
The Slyrs 2009 Bavarian Single Malt Whisky is Egon Schiele–He was a man before his time, and yet a man of his time. He had a peculiar intensity of vision and his work is totally unique. Prosit, Slyrs!

–Our thanks to Sarah for the deutsche feuerwasser!