[The last day of the year is the perfect day to remember loved ones we have lost, so on this December 31st, we remember a whisky that probably disappeared from shelves before 2013, but to this day holds a place of veneration in our collective memory.  Written a long time ago now but not published until today, we invite you to gaze one last time into Infinity…] 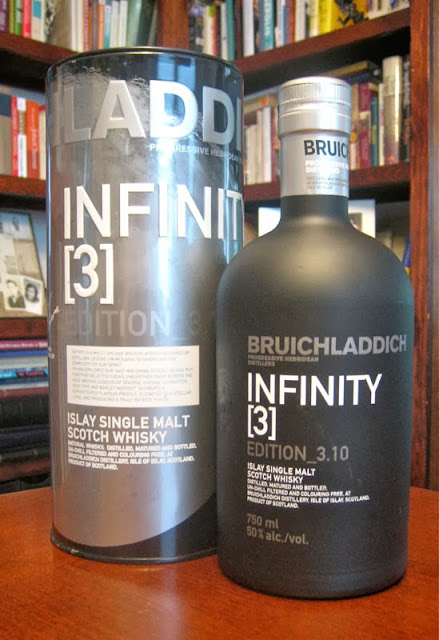 Tasting notes:
I’ve just returned from testing the Bruichladdich Infinity 3.10 on an Apple computer, a PC, a UNIX Sparc Station, and even an Amiga. When I dunked the mouse into the BI 3.10, the mouse passed through a veritable black hole, and strange characters began to appear on my screen. As best as I could decipher, they were Greek letters from Aristotle’s sections from the Physics that dealt with Zeno, scrambled, mixed with Georg Cantor’s gothic German script from his treatise Contributions to the Founding of Transfinite Numbers, overlaid with an audio track of Carl Sagan intoning, “Billions and billions…and billions and billions…and billions and billions…”
Applying Shannon’s information theory, and using a jury-rigged version of Alan Turing’s bombes, I ran the signal through a digital-to-analogue converter, then I ran that output through Google’s translator, then put that output through a shark tank at the Monterey Bay Aquarium, picked it up on sonar, and finally realized what it was that Jim McEwan was trying to tell us from beyond Islay:
That whisky might nose of slabs of applewood bacon crisped in a deep fat fryer larded with beeswax. That liquid smoke and gaseous black truffle oil can be married–in an alchemical sense–and produce the miraculous salty tears dripping down the cheeks of statues of the Virgin Mary. Or, if those should prove a hoax, the tears of a hipster watching while his favorite fixie bike shop or haberdashiery (where he purchased his derby hat) BURNS TO THE GROUND.
That it might taste of clovish spikes of dried pork jerky driven into boiled ham wrapped around smoked baby back ribs in a purely boarish version of Turducken. That it’s the act of smoking a tobacco leaf unwound from a Monte Cristo cigar in a spliff holder made from cured bayou reed salvaged after the Gulf oil spill. That it may as well be unchillfiltered first press olive oil with feet in all parts of the food pyramid. That drinking it is as making origami cranes with scraped stiffened sun-dried javelina hide. That Jim McEwan can take mere liquid and transmute it beyond spacetime, and then have it return as a pale amber comet calving in the Earth’s atmosphere, raining joy on our upturned faces. Kind of like Samuel Beckett was able to take near-death stabbings, odd phrasings, obscure plottings, and turn them into a Nobel prize.
That it finishes as it begun, for a circle has no end, and is infinity in a bottle.

–On the scale of all black paintings currently not on display in well-endowed museums–
The Bruichladdich Infinity Edition 3.10 is Ad Reinhardt’s abstract painting called “Abstract Painting,” which is owned by the MoMA–It’s all black, although if you gaze at long enough into the vastness of it, it is said to appear differently black. I find it an enigmatic vision of the deeps of space, and I vastly prefer McEwan’s vision of infinity.