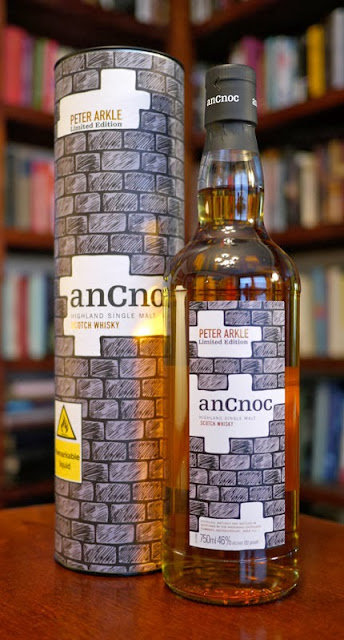 Tasting notes:
The anCnoc Peter Arkle Limited Edition: Bricks noses like the quintessentially East German aroma spiraling away from Katarina Witt’s axillae while she was doing a camel spin in the 1988 Seoul Olympics. Indeed, I had rinkside seats.

You know guys, I hear your voices in my head as well as reading them. Anyways, besides Katarina Witt on the nose, there are kid’s flip-flops made from boiled ham, post-chlorine-drenched-wading pool-excursion, and a heap of slightly mouldering autumn leaves just feeling the first singes of fire. More than that, porpoise blasts of water topping off a butterscotch banana split with red peanut skins. (Katarina Witt ate all the peanuts. Or maybe the porpoise did.)
On the mouth, effervescing grilled lemons in lime juice skewered with sliced sugar beets, carmelized parsnips, and your soon-to-be-ex-boyfriend clinging to you like Katarina Witt’s spangly leotard, but way more insecure. Kinda like telling your dog you’re giving him the uneaten half of your Kobe beef burger, but instead tossing him a peanut butter slathered oat scone. (Don’t worry; he still loves you.)
The finish rises in intensity, like a Katarina Witt long form Olympic performance, and cycles like an oven’s self-cleaning inferno blast, searing away any sins not yet swallowed. It’s Raoul Duke‘s doctor’s recommendation for that nascent infection infesting the back of your throat, the part caressed by Katarina Witt’s hands as she’s Rolfing your neck and shoulders. It’s jitterbugging on pine needles wearing clogs, while drinking apricot syrup in a shot glass that lately held escargot. With Katarina Witt.


–Our thanks to Brian Johnson and InterBev for the sample!