[In anticipation of the imminent arrival of the 2013 Buffalo Trace Antique Collection, we’re posting a couple of whiskeys from that collection we’ve had but haven’t reviewed (or posted the reviews of) to this point. We do this knowing that we’re just adding to the craziness around these releases.  Let the party begin!]

Tasting notes:
Confession: Before my conversion 29 months ago, I wasn’t a Bourbon guy. I still don’t think of myself as a Rye guy, even though my fourth wife grew up in Rye, NY; I like ham on rye, and I have a wry dry sense of humor. A couple of the ryes we’ve reviewed were revelatory, but not epiphanic—which might sound contradictory, but isn’t. The Thomas H. Handy Sazerac Straight Rye Whisky, however, made a believer out of me. The nose is crazzzzy cotton balls drenched in lemon oil and Drambuie and set aflame in my sinus cavities, but the Bourbon-y under- and over-tones convince me that lots of corn, and probably some wheat, are lurking there in the mash, too. Grits and chervil, I’m tempted to write, but I won’t. [John: Well, that makes me want to write “Chitlins and gerbils”, but I won’t, either.] Native American corn nuts dusted lightly with parched poblano pepper powder.
On the mouth, Indonesian pine needles dipped in India ink (in Indiana, indeed) or, alternatively, smoked spruce leaves used to spice a daring consommé served at an early summer party in the Hamptons, East Egg. It’s like a Granny Smith apple, especially selected by Harry & David® to convey a cloying quality—not exactly syrupy, nor precisely hoppy, but fairly much like a (hypothetical) Dogfish Head Imperial Stout/IPA mash-up mix-tape. Finishing with a lip-smacking gelatinous aspic topped with ground anise seeds, green grapes, and napalm. My soft-palate has run for cover and is hiding in my (now useless) Mayan-End-of-the-World bunker.
With water, juniper berries emerge, like buds after the spring thaw. Spicier on the tongue, like being caught in a pretty, gritty, grainy grist mill larded with scotch bonnet seeds instead of tellicherry peppercorns. The finish is smoother, but still feels like a new new-age esophageal cleansing; a colonic for the other end of the GI tract; a candling of the pharynx, et al., as it were.

On the scale of exciting football plays–
The Thomas H. Handy Sazerac 2012 Straight Rye Whisky is the Hail Mary (You really didn’t think I’d follow up the religious theme, did you?)–We can win the game: the crowd is on its (collective) feet roaring and screaming! The receivers are racing downfield, the quarterback avoids the rush, cocks and fires the ball 60 yards into the endzone! It’s…it’s…it’s…an *amazing* rye. Too frickin’ bad they make so little of it and it sells out the day it arrives. 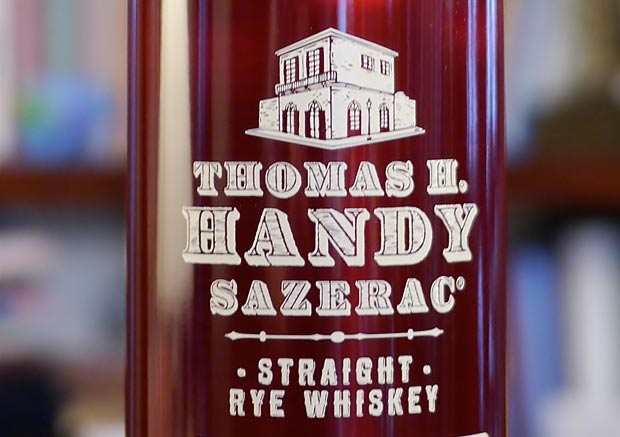