Tasting notes:
The Highland Park Linn 40 yo special edition. Opening with rich lacquer made from crushed amber taken from the props department of Jurassic Park, prayed over and fondled by Jeff Goldblum, Laura Dern, and Samuel L. Jackson as they held an impromptu sèance in an ironwood, baobab, and manzanita kiva owned by Steven Spielberg. Thrown onto the central fire to steam and scent were chunks of crystalized ginger, juicy nightcrawlers, gum tree resin, fresh bay leaves, spare ribs in Memphis BBQ sauce, ruby grapefruit pulp, and the eye of a newt. (Just kidding about the eye of a newt.) And then, from skull of a triceratops, honey. Remarkable honey made solely by maniacal queen bees working for one über-Queen bee. Winona Ryder comes in with heather from the set of Heathers. A hint of the chewing gum chewed by St. Peter as he idles away the long dull stretches at the pearly gates waiting for any pure soul to come. The crisp burnt sugar brûlée from a crème brûlée from Spago Beverly Hills used as a trivet, holding a Lalique decanter filled at the Well of Souls, ready to tip on to the fire. I never want to stop smelling this. I want my DNA restructured.
Spicy and fiery: Have we awakened demons or a monster from the id? Peppers, ghost pepper—but I should rather have said “ghostly peppers” as opposed to the Scoville-scorching sort, although they bring habanero-like levels. It’s taken my tongue hostage and refusing to negotiate until Natalie Portman and Mila Kunis come and accede to an odd list of demands that starts with “Perform the Endless Love duet from The Blue Lagoon,” and ends with “re-enact the amazing Tom Hanks/Robert Loggia piano scene from Big.”  I’m not counting on ever getting my tongue back. 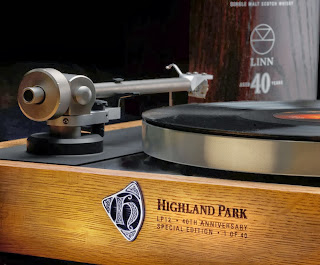 The finish is longer than a bad marriage with children. (But much, much better!) Cream, and apples fermenting at a pumpkin festival, long after everyone but the kindly old caretaker has left. Hay bales, clean flannel, and molasses transmuted into maple syrup, that was then transmuted into bacon. One of the five best whiskies I’ve ever tried.
It’s probably worth noting that the Highland Park Linn 40 year old special edition costs £25,000; that is,about $40,000. That puts it a wee bit out of my price range, but I gather that they’ll throw in a Linn Sondek LP12 turntable, which is purported to be an outstanding channeler of good vibrations. (Scroll down for a photograph of the whisky/turntable combo.)

This implies HLP^2 = 83 1/3…hmmm, this is not getting me closer to my goal of acquiring a bottle. Maybe abject begging of the incomparable Steph Ridgway would do it? Steph? Pleeeassseeee?????

–On the scale of things guaranteed to break any scale–
The Highland Park Linn 40 year old Special Edition is a black hole–Fits on any scale? Check; it’s a point-mass. Breaks any scale? Check; even a youngish black hole will weigh many times the weight of the sun. Does it suck up all light and joy and hold it forever in capture (except for an occasional paired virtual particle at the Schwarzschild radius)? Check; a slough of despond, a pit of despair: all is black now that the dram is gone. Help me, Obi Wan Ridgway. You’re my only hope.


–Our thanks to Steph Ridgway and Highland Park for the sample! 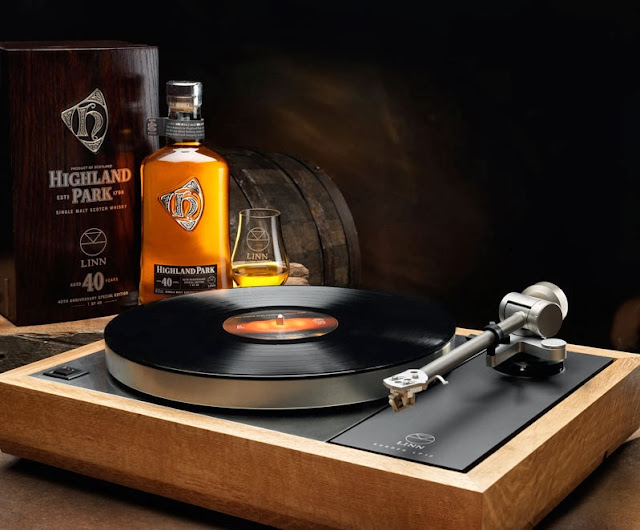