[We reviewed this one a long time ago as a mini, but figured the full-sized bottle warranted separate consideration.  Boy, were we ever right.] 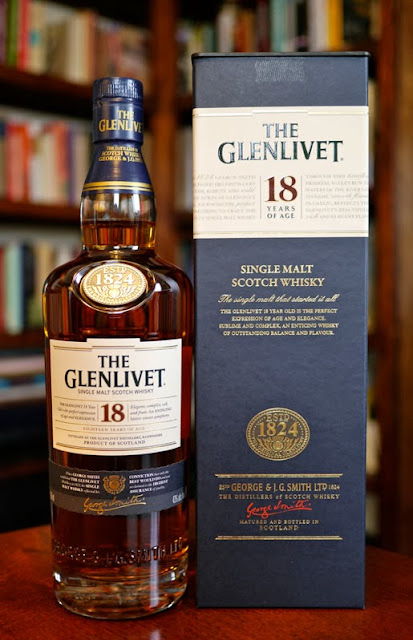 Tasting notes:
For many reasons, the Glenlivet 18 is the epitome of scotch.  One reason is that you can present a bottle in the absolute confidence that the recipient will fully appreciate your thoughtfulness and refined discernment.  Even if the recipient thinks that “epitome” is a three-syllable word.  Now don’t get me wrong.  What I mean to say is that there is so much right about this whisky that it embraces all who come near it.  To be sure, this has been said of black holes as well, but my gentle reader understands what I mean.  Nevertheless, it did produce a kind of inescapable gravitational force on Bill’s initial take on the nose.  “Gorgeous,” he started contentedly.  “Coffee, toffee, brown cow, how now” he went on to say, a little more quickly.  Then this all burst out at once: “amaretto, Frangelico, Fran Drescher, French Dressing!”  Wow, has there ever been a nose like this, I wonder, one that summons descriptions of itself like an exorcist drawing out demons?  As that thought crossed my mind, Stephen was wavering suspiciously, his eyes glazed over trying to set down his empty Glencairn glass.  He looked for all the world like a man reaching out for eyeglasses that had fallen into a scorpion terrarium, so uncertain were his gestures.  Now Stephen, it should be noted, once offered a five-syllable pronunciation of “epitome” during a toast at Brasenose College, Oxford, which was unfortunately taken as mockery of a Lecturer who shall not be named here, and he has not been invited back.  So as his words began to form, I leaned in to hear “Banana,” intoned slowly, almost as if it were three words.  Then, more quickly, he uttered “jam, jelly, jello, Jello Biafra, Africana Bananarama!”  It’s happening again!  My duties as secretary bid me to transcribe all of this, just as it happened.  But I was also eager to try this remarkable whisky for myself and share my sense of the finish.  Wisely, I depressed the lever on my AKAI 4000DB and the Sony PR-150 reel started to draw the ¼” magnetic tape across the tape head.  The transcript below is only record of what happened next:

There followed 30 minutes of silence broken only by Bill’s snoring lightly between minute 17 and 19.  We awoke to the sound of flapping tape and Stephen nervously tucking in his shirt.  Our heads felt like we were cave dwellers who fell asleep on a methane vent, but with the satisfaction of a having summited Mt. Kilimanjaro in Bermuda shorts.  The Glenlivet 18 is refined, exceptionally balanced, and—even when it induces fugue states—utterly memorable.

–On the scale of fugue states depicted in fiction–
The Glenlivet 18 is the one experienced by Tolkein’s Smeagol–He presents the classical symptoms of the dissociative disorder: it is brought about by profound stress (that of murdering his cousin, Déagol), he travels unexpectedly (to a cave in the Misty Mountains), and takes up a new identity (Gollum).  Other symptoms (unusual long life, raw food diet, hairlessness) are not as common.  But knowing what things are, in fact, precious?  That seems as much a side effect of the inimitable quality of the thing in his possession.  Tell us about it, little dude.  The Glenlivet 18: we wants it, we needs it.  Must have the precious.

–Our thanks to Craig Bridger and The Glenlivet for the sample!