Tasting notes:
Don’t nose this Bourbon if you’re hungry: initially, we got pecan pie with caramel drizzled bacon–and Bill ran out the door in search of food.  If you stay with it, though, the nose alternates between smooth and choppy: it’s horseradish on a perfectly ripe apple, a goose down pillow with quills poking a child’s cheek, all with an elegant undertone of spearmint gum.  There’s also a hint of wax on the nose (beeswax, not ear wax) that lurks beneath a sweet wine note and plays peekaboo with you–but not in the annoying way children do.  Just kidding.  It’s just as annoying.
The mouth is a smoked almond studded caramel apple dusted with Cajun seasoning.  It’s exceptionally smooth, especially for 90 proof Bourbon.  We found ourselves checking the bottle again and again when the whiskey was on our palates, just to make sure an evil demon hadn’t switched the liquid on us between nosing and tasting.  But then again, how would we ever know? “I don’t do stupid epistemological questions,” Bill announced, and then proceeded to eat the box of apple fritters he had brought back with him.
The finish is long, but a bit narrow, not unlike the bottle from whence it came.  It’s both dry and drying, and it’s almost only that and nothing else.  People who love Scotches finished in dry sherry casks will probably continue to do so.  But they’d probably also love this.  As time and the finish went on–and it keeps going on and on–it went from dry to downright desiccating.  John put a small piece of marinated steak on his tongue, took a solid belt of this whiskey, held it on his tongue for ninety seconds, and when he stuck out his tongue, it’d turned into beef jerky.  The steak, not his tongue.  Bill took a much bigger piece of marinated steak, put it in his mouth, glorped a healthy volume of the whiskey and, lo and behold, they had both disappeared.  Miraculous all around. 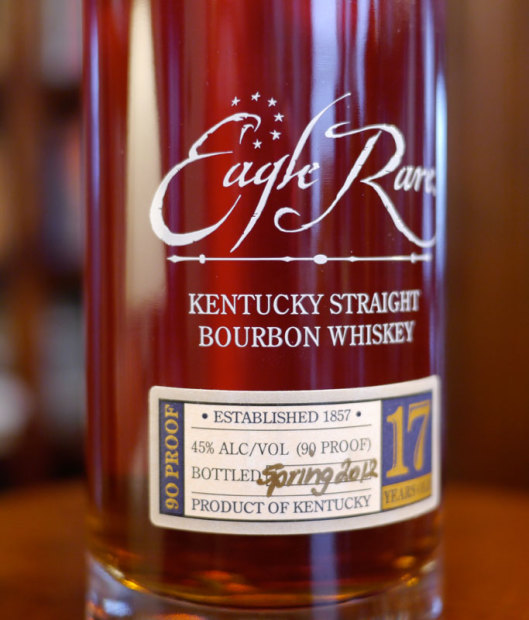