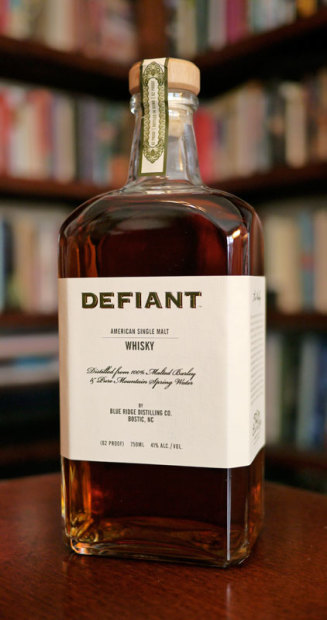 Tasting notes:
The Defiant American Single Malt Whisky, 100% malted barley, 41% abv, noses like an albino Samoyed raised in a cave by fiercely protective wolves (think: The Jungle Book  [Stephen: or Jack London, who’d call him and the novel about him Defiant.]), who fed him a strict diet of fennel, bananas, and gin-and-tonics. They also provided him with antique varnished camphor-scented maple earplugs they brought back from a raid of the village apothecary shop to help him block out their fiercely protective howling so he could sleep during the day. He runs with them at night, a ghost dog under the cold full moon light.
On the mouth, lilies that were driven home from the florist’s shop in a bright blue Fiat that first drove past an Olympic runner carrying a bouquet of lilies, rather than a torch. Then the driver, Lilian, drove through the olfactory aftermath  of a lily-laden Lily Parade honoring skeet-shooting squads about to face off in this year’s edition of the infamous Lily Bowl, in which competitors from Lille and Lee-on-the-Solent reaffirm both the ancient friendship and the enmity between the French and the British and compete to see who goes on to Lillehammer. Beyond the lilies, or rather, through them, there are marsh reeds, mallow weeds, ginseng seeds, Tawny Kitaen, and Marcia Brady found in Moses’ wickerwork lanai chair. On the mouth, sunshine rather than moonshine; a Prohibition-era cocktail-ready drink that is already showing signs of complexity like the beginnings of a village by a river ford.
On the finish, peppermint drizzled in old school Log Cabin™ syrup with a high percentage of real maple syrup, served with a soupçon of dark single-barrel cask-strength Karo syrup used on Park Slope as an ironic garnish to quinoa hoecakes.

–On the scale of patterns that serendipitously rearrange themselves–
The Defiant American Single Malt Whisky is the Anagram–Because, of course, “Defiant” is an anagram for “Fainted,” as in: The Defiant was so delicious both Roderick and Rowena fainted, his pince-nez falling to the ground and smashed in the ensuing confusion.

–Our thanks to Lauren Kuchar and The Blue Ridge Distilling Co., Inc. for the sample!