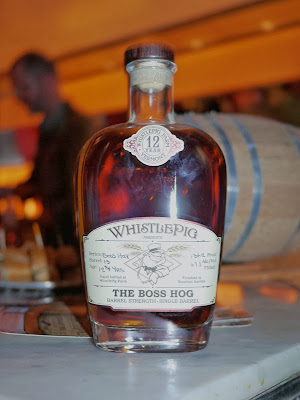 Some might label the night of Monday, November 4th, 2013 as “the eve before the election of Mayors and Schoolboard Members across this Great Nation of Ours,” but for me, it will always be the night that I got my senses seared by a glorious sunburst at the dawning of the Age of the Perfection of Rye Whiskey.
By luck—fortune favors the bold! and the lucky!—the Malt Impostors received an invitation to the Boston edition of the rolling-out party of the WhistlePig Boss Hog 12-year-old-cask-strength-liquid-gold ecstasy in-a-botlle at Silvertone’s in Boston. This is not to gloat, friends of the Impostors, but rather to share our sadness with you. Assembled from a mere 24 specially selected barrels, and like dandelion seeds in a Santa Ana wind, those cases have been strewn across America. Brand Plenipotentiaries Daniel Khan and Ben Silton, not wanting to see grown men cry or torture ferrets, gifted us with a small dollop to take back to the Malt Cave and, in the due course of time, review. [Stephen: You have no idea how much we’re looking forward to that!] Other than that, friends of the Impostors, we share your likely plight of not being able to get ahold of Aladdin’s Lamp, the Maltese Flacon (not a typo), the gold of El Dorado, the Holy Grail, the Ark of the Covenant, and the Boss Hog Rye Whiskey.

Where was I? Oh, yes, with Stephen. (John couldn’t come; the last we saw him was heading towards the airport muttering something about schoolboard problems “out West” that needed “fixing.”) Besides Daniel and Ben, we had the pleasure of meeting and talking with Danhee Kim, classy dame, marketing guru, and Director of Sales and Marketing at WhistlePig. She told us all manner of interesting tidbits about the company, and although at first we assumed she was being modest, recommended that we get the story behind the name from Daniel (Genghis) Khan. [Stephen: I’m sure Daniel’s never heard or thought of either of those, Bill.] Daniel evidently missed a chance to tread the boards lit by the bright lights of Broadway, because his telling of the tale was not only pitch-perfect, and in multiple characters, he even broke the 4th wall by grabbing my lapels and shaking me at the appropriate moment!  Suffice it to say that mere words can’t do it justice, but it involved an early midlife crisis, a mountain, a madman, an abandoned dairy farm, a beacon of destiny, and Master Distiller Dave Pickerell.

Speaking of whom, he was on hand, fedora (or was it a porkpie?) hat on head, glass in hand, and after we’d all loosened up with either straight shots of the WhistlePig 10 (“100/100”) or cocktails, noshing on salmon bites, mini-pigs-in-a-blanket, and potstickers, he led us through a tasting of the Boss Hog. Master Dave spoke movingly of his time served—14 years—at Maker’s Mark, and how he became entranced by the allure of Whiskey Made from Rye. He told us of how he, in his quest to make the perfect Rye Whiskey, met WhistlePig Founder and CEO, Raj Peter Bakta, and the two of them spent a year touring the globe in search of the key to unlock the Secrets of the Rye. 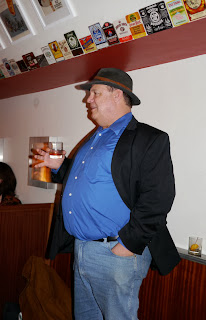 We love the WhistlePig “100/100” and the “100/111”, and perhaps we fell under Dave’s spell, but my goodness, the Boss Hog is extraordinary. [Stephen: If so, that was one helluva spell–and Dave Pickerell a frickin’ sorcerer.] I can’t really imagine how rye whiskey could be improved upon from what we drank, but the glint in Dave’s eye, combined with the steely certitude in his voice, convinces me that whatever’s next will be worth waiting for.
After an hour sipping the Boss Hog, I naturally tried to get another glass. Naturally, by then, they’d all been snagged and the roll-out, as far as I was concerned, was over. [Stephen: Or, as some say where I’m from:  The roll-out done been rolled out.] But there was one more notable event for us. Raj recently had been in an accident and had suffered some injuries. Consequently, we’d been told, he’d been unable to make it to the roll out. But on our way out, we found that he’d found a way: Somehow he’d managed to get his wheelchair down the stairs to Silvertone and we were thus able to wish him a speedy recovery and to congratulate him on a Job Very Well Done. (We like to imagine he got to the top of the stairs, took a healthy snort of the Boss Hog, and like a boss came down the stairs in his wheelchair, kamikaze and ninja rolled into one visionary.)

We’ll have a review before long, but it doesn’t matter: None of us will be able to find a bottle. Let the weeping commence.