[We were lucky enough to nose this amazing whisky as it married in the hallowed Tun 1401 at the distillery this past summer.  We’re thrilled to experience it now from the bottle.] 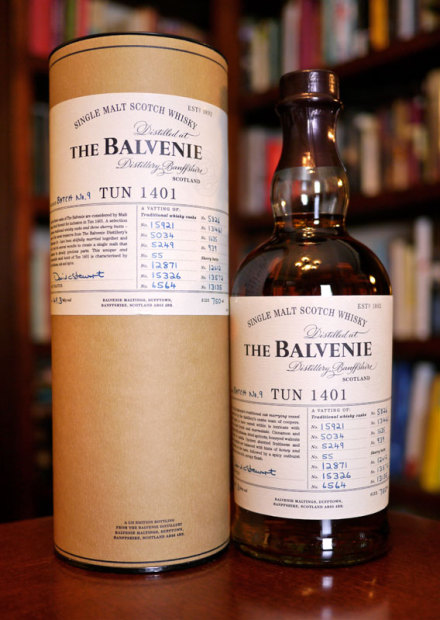 Tasting notes:
Our ardor for the Tun 1401 is well-documented.  It’s one of those whiskies that not only moves the goalposts, but replaces the ball and changes the rules with more capriciousness than Calvin.  How else is it possible for me to say, authoritatively, that this $250 whisky is a value pick?  I mean, it really and truly is.
My only worry is that the good people in Dufftown will huddle up their marketing team and realize that they’ve made the same decimal mistake on all nine batches, and should be charging over $2000.  So the only sensible thing to do now is to suppress demand.  I urge other members of the whisky media and blogosphere to follow suit.  Accordingly, I am announcing and inaugurating Project Tun One Four Oh Blech!  Herewith my notes for “Batch Nein”:

It has the nose of kimchi made from Brussels sprouts and industrial strength lye.  The mouth is undercooked moose intestines stuffed with unwashed eels left to sour on a dock.  The finish is like the “chocolate” cake depicted in The Help after being made into a ganache on the Martha Stewart show.

Of course, the Tun 1401 batch 9 is none of these things.  So let me give you another reason not to drink it: it will change how you think about whisky, and about what whisky can do.  Not because it is so unusual, but rather because it is so right.  This is the whisky for last meals, the aperitif for an execution.  The nose is a ship’s log of wines decanted and poured into Horween chromexcel leather saddle shoes.  Fruity candies in a glass bowl.  Electric cigarette smoke rings.  Two unibrowed unicorns riding past the university on a bicycle.

The mouth is an extravagance of pleasure prompting Bill to take an unusual turn and cite the Biblical parable of David and his dram of many colors.  (I was pretty sure it was Joseph and he had a cloak, but at the time this seemed fitting and Stephen and I nodded.)  But the complexity on offer here is stupendous in its intricate simplicity.  Think of mica–which I call Nature’s puff pastry–with its thin sheets of butter-shiny, mineralic iridescence.  A splendor of monarch butterfly scales and peacock feathers captures, albeit visually, the gustatory prison riot that this whisky brings out.  Waxy, but like the limited edition Jesus H. Christ!™ Yankee Candle scent.  Briny, but a clear and fresh brininess like what you’d find in the great river of myth, deep-running Oceanus, as it laps against the very edge of the world with a plock, plock, plock resonant with the sublime.  Saltwater taffy drawn from the same waters, but for an adult palate.
The finish is an ultramarathon with snail contestants; they won’t finish, but their great-grandchildren might.  Initially there’s heat, like Red Hots made by Ming Tsai: tiny glistening droplets of candied spicy heat with a syrupy roundness neither too thin nor too cloying.  Then it settles into a steady state, resembling nothing if not the liquefied essence of an Everlasting Gobstopper.  After all, a parsimonious 10 ml pour really drinks like a profligate 150 ml measure.  And this, in closing, is where I spot the value.  Each bottle of Tun 1401 drinks like a 12 bottle case.  The world is made better by its appearance, kind of like the way I feel about waffles.

–On the scale of waffles–
The Balvenie Tun 1401 Batch #9 is the Liège waffle–Chewier than the American waffle, more complex than the Stroopwafel, and more briochy than the Belgian waffle, truly the Liège waffle is the liege of every waffle.


–Our thanks to Andy Weir, Mitch Bechard, and Wm. Grant & Sons for the sample!