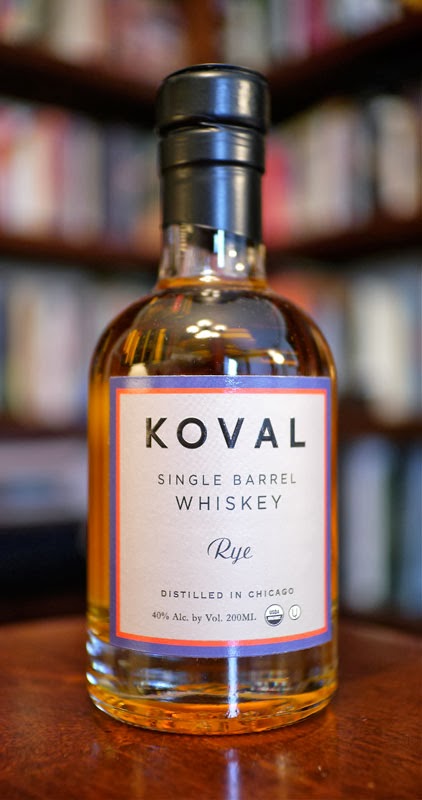 Tasting notes:
The Koval Single Barrel Whiskey, 100% Rye, Barrel 332, opens particularly herby: sage, parsley, and bay leaves. James Beard, reincarnated as a rabbit, approves. There’s also creamy cherry lollypop, of a sort given out by a hyper-cool Swiss bank that refuses to grant accounts to lawbreakers who want to launder money.
On the mouth, a smooth segue from the nose, a thing I particularly admire. It’s richer, creamier, cherrier, sager, parsley-ier, and bay leafier. This is too much for a rabbit or a Swiss bank; this is tonic suitable to soothe whooping cough or make into chutney. It’s got long bass notes, much like the Russian Army Choir version of “Sixteen Tons.”
The finish is acute, like yellow origami paper cut into isosceles triangles, then folded into shuriken thrown into a human-shaped target of jiggly malted banana pudding studded with Nilla® wafers and Rummy Gummy Bears. Beard pomade used by former Byzantine monks getting their civilization funk on. Welcome back to the world of illusions, suckers. But now that you’re here, meet me in a bar and we’ll nose a glass of Koval.

–On the scale of underappreciated Russian mathematicians–
The Koval Single Barrel Whiskey, 100% Rye, is Sonia KOVALesky–Weierstrass proclaimed she had the “gift of intuitive genius,” she was the first woman to earn a PhD in Mathematics in Germany, she won the Prix Bordin from the French Académie des Sciences, and her last name rocks. Well done, Frau Professor Doktor Kovalesky!

–Our thanks to Mariah Veis and Koval for the sample!