John:  Whisky Live made its first appearance in Boston last year, and it was a brilliant debut indeed.  The most remarkable feature, as compared to other whisky events, is its length.  Boy, have I heard that before!  As I was saying, the long time means that the evening has a sort of gentility to it.  You can take your time, talk to the representatives of the different distilleries, and every so often actually listen to what they have to say.  So it was this year, but there was the added bonus of a large venue.  The Park Plaza Castle, which used to be called the Boston 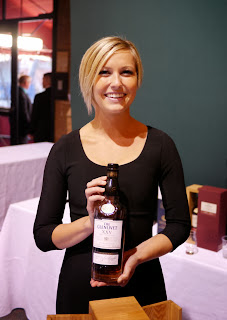 Armory, abuts a Smith and Wollensky steak house and is probably left unheated in winter and used to age beef during the convention offseason.  The cavernous space and the length of the festivities ensured that you could try any whisk(e)y you wished to without having to wait or feel that you needed to rush off so that others could come in.  I felt like a hyena on the Serengeti plain, except that instead of a bunch of hyenas tearing into a single antelope, it was a hyena’s dream in which I am the only hyena anywhere and an entire herd of antelopes lies crumbled in the grasses, limbs splayed, mouths agape in a rictus of dismay.  Yes, I was that lone hyena gently pulling at the entrails, taking small bites, enjoying the buffet.  No need to rush, I told myself.  Plenty for everyone.  Especially since Bill couldn’t be here. 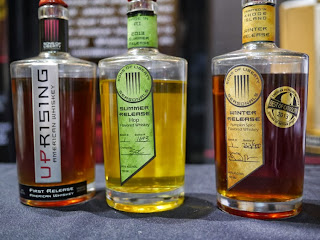 And indeed there was.  A bale of bourbons, a rabble of ryes, a sownder of single malts.  In addition, enough beer, cognac, rum, gin, and freshly-made cocktails to outfit a Brett Michaels after party and the after party after the after party.  Right as we walked in, there was an ostentation of Obans, a team of Taliskers, a leap of Lagavulins, a gaggle of Glenlivets.  This was going to take a measured, disciplined approach!  Fortunately, the food was excellent: beef stew, chicken breast, two kinds of ravioli, and a assortment of dinner rolls, salad, and sides.  Keepsake Glencairn glasses and complementary copies of Bourbon magazine rounded out the swag.  And there was a rather unorthodox bagpipe band on hand.  Or maybe they were orthodox: once they broke into “Havah Nagilah,” I was convinced we were listening to the Clan Abraham Klezmer Band.  But you’re reading this for the whiskies, so let me get back to business.

In addition to the many old friends we could reacquaint ourselves with, there were many newer, American distilleries pouring out their wares.  Koval from Chicago with their organic whiskies and the unforgettable bourbon made from corn and millet (see picture below).  77 in Brooklyn with bourbons and ryes.  Templeton Rye from Iowa.  And the Sons of Liberty from Rhode Island and their improbably excellent pumpkin whiskey.  These upstarts provided moments of serendipity and wonder.  To be sure, there were revelations among the well known distilleries.  Highlights included the Jameson Rarest Vintage Reserve, the George Dickel Barrel Select, and the Parker Heritage Collection ALS Promise of Hope Edition.  All of them were outstanding.  There was the Scapa 16 that has a note so distinctive, so winning, it’s like a tiny drop of truffle oil in an omelette.  There was the Brenne French Single Malt that I would weave into a cashmere scarf and wear to the beach.  Oh, the Aberlour A’Bunadh!  Hello there, you unpronounceable old friend!  The Elijah Craig Barrel Proof, sporting the dark color of Army hospital waiting room coffee.  Hi there High West!

There were also some Gordon & MacPhail lovelies, especially the Old Malt Cask Cragganmore 21 exclusive to Julio’s Loch and Key Society.  And the Tomatin Decades courtesy of Federal Wine and Spirits.  So many wonderful drams!  So much time!  And no Bill with us to enjoy it.  Alas.  Sucked for him and for us.  Sorry, dawg. 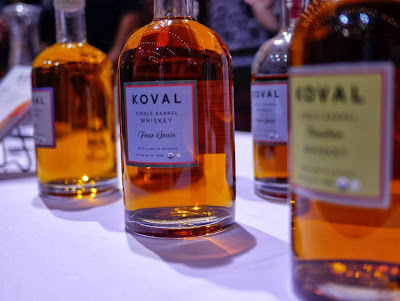 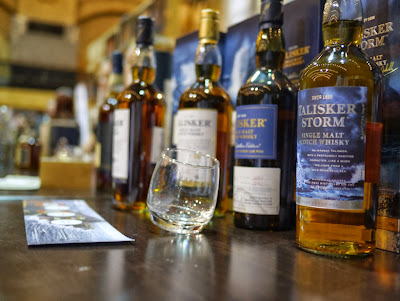