Stephen promised he’d be gentle. We booked a hotel room, I left the ferrets at home, and we fired up the MaltMobile, which too long had sat idle in the MaltCave. John, unfortunately, had a root canal; not for his tooth, but rather a canal he wanted to dig under the roots of his potted Ficus Benjamina tree. (We didn’t really understand it, either. Nor have we seen him since he started to dig.)
The WhiskyFest hotel was conveniently located in Times Square. The virtues of the wise choice of venue were soon obvious to me: 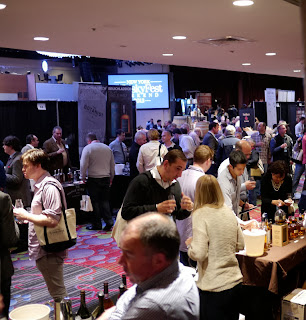 Anyways, the Grand Tasting, including the VIP hour—which any reader of discernment simply *must* do—runs from 6:30 to 10:30. After roaming the neighborhood, we were primed with excitement to burst through the doors into the WhiskyFest ballroom. Accordingly, against Stephen’s counsel, I lined up a few minutes shy of 6pm, was granted access, excitedly streamed forward, and sadly was forced away from the festivities, as they were open for no one. However, and this is a small symbol of the genius of the festival, they’d set up a few tables loaded with delicious cheeses and an assortment of crackers. We immediately got down to working on completing the hepfecta of the Seven Deadly Sins:

#4, Sloth, had been languorously achieved in the idle time between the all-day seminars and the VIP tasting. When walking two blocks for a sausage is all that is accomplished in three hours, you, my friend, are slothful.

#6, Envy, was easy: Stephen went to the all-day Seminars, and I did not. Bastard.

#7, Pride, was easy for Stephen: the Glenmorangie Pride, a favorite of mine, was poured at the seminars. Bastard. 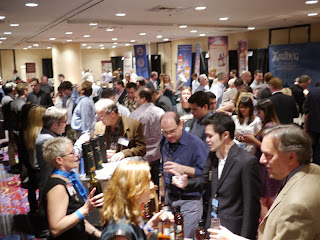 It was time for #2, Gluttony! And gluttonize I did, snarfing delicious cheese, stuffing my face with crackers, chatting amiably and pleasurably with some fine folks originally from Kentucky, reveling in the notion that we already four sins to the wind.

When the doors opened and we went in, it was like Christmas, Hanukkah, Kwanzaa, Diwali, and Thanksgiving Day all rolled into one! The swag bag includes a handy guide to tables, brands, and pours. We probably should have mapped out more carefully our swath-cutting path through the WhiskyFest Grand Tasting, but instead I leaped about like an ADHD kitten chasing a laser pointer’s red dot. I went first to the Elijah Craig table, where I tried the Parker’s Heritage Collection Promise of Hope and the Elijah Craig Single Barrel 21 year old. 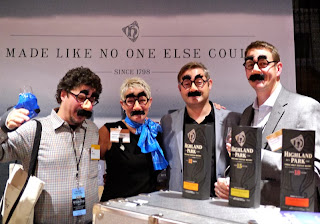 Next, we ambled over to Highland Park to say hello to the incomparable Steph Ridgway, who promptly busted Stephen’s chops (metaphorically, mercifully). She poured us the Loki, she introduced us to Gerry Tosh, the Global Marketing Manager for the Edrington Group, and we caught up also with Sally Sanders as well.  Then we approached the table of fine Japanese whiskies, whose light nature and refined character I love. There, I sampled the delicious Taketsuru 21, and then Stephen reminded that during the VIP hour, Balvenie was pouring the Tun 1401, Batch 9. Beyond our unabashed Malt Crush on the Tun 1401 releases, I have a special connection with it: It was merging in the eponymous Tun 1401 when we visited Balvenie earlier this summer, and when David Mair uncorked its bunghole, I quickly stuck my nose directly over and inhaled deeply. It was angels, unicorns, rainbows, and Studio 54 in its heyday, all in one sharp inhalation. Glorious. And then, I was overcome with Deadly Sin #3, Greed. I wanted more! I wanted every VIP pour! I wanted to chat at length with all the knowledgeable, kind, wonderful brand ambassadors, master blenders, stillmen: all of them! More, more, more! 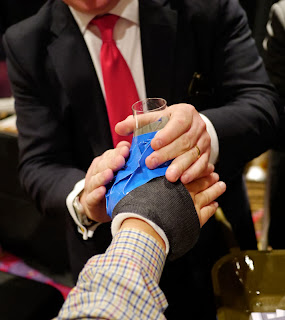 A quick check-in with Joshua (Man)Hatton, Jason Johnstone-Yellin, and Seth Klaskin at Single Cask Nation preceded a somewhat longer stop at Usquaebach with Brand Ambassador Tom Lewis. Stephen noticed that my broken thumb was making it hard for me to hold a glass, the dram directory, the swag bag, appetizers, business cards and the like. He proposed that duct tape, the universal fix-it, might avail. Nearby was David Blackmore, Master Brand Ambassador of Glenmorangie, who noted that he had duct tape, and this was the result: Billy Glencairn Hand. Not quite the Dread Pirate Roberts, nor Edward Scissorhands, nor the one-armed man, but a kind of Venn Diagram intersection of the three. 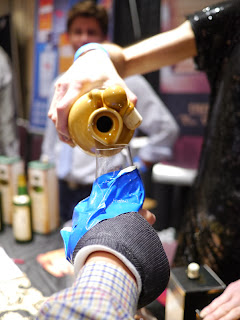 [Stephen: Dear Reader, please note that the pictures attest that Bill clearly has the chronology wrong here. But it’s no wonder: at the event, he left behind his journalistic ethics the moment he strapped on that Glencairn.]
It suddenly struck me that there was one more VIP pour I’d really wanted, the Benriach 1976 Port Pipe. Like an ocean liner—the Titanic, say—trying to reverse course, I suddenly swerved to Benriach’s table, unwittingly invoking Deadly Sin #5, Wrath. Although 15 minutes remained of the VIP pour, they were out of the dram. Wrath! But quick as a cork being yanked from a bunghole, my wrath vanished as the kind Benriach folks poured me drams from two unlisted special bottles they’d brought along: a 2001 and a 1996. Both were superb, and I gave a slight edge to the 2001. Delicious. 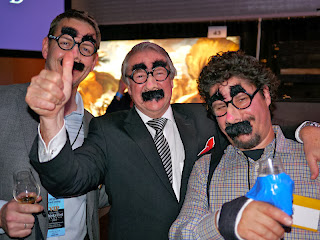 Soon thereafter, we stopped by Dalmore and the Isle of Jura, having a King Alexander III, but more importantly, got Richard Paterson to don the Grouchos. Best of all, he neglected to slap me, suggesting he must have been in an especially mellow mood.
As the VIP hour ended, we moved to the fabulous buffet and went back to the tried-and-true #2 Deadly Sin, Gluttony. There was, to my mind, one flaw with the buffet: No dessert! By then I was feeling mellow enough that Wrath had taken one of the algorithmically-controlled elevators to the lobby, out the door, and off to a showing of The Lion King a few blocks away. Besides, just on the other side of the buffet in the back (there were three) was a Bourbon Country contingent with a massive bowl of bourbon balls. Yum. Uncharactisterically, I showed restraint, downing only two or three in short order. [Stephen: Don’t be fooled–that was probably more like two or three dozen.] After the bourbon balls, the tasting entered the joyous whisk(e)y festival zone in which it seems life simplifies and unrolls like a Ta’i Chi Ch’uan form in mock combat with Martha Graham in a dream state. Friends, old and new, beloved drams, old and new…the energy of the crowd, the joy of the drink, the amiability of those manning the tables, the palpable pleasure of the participants is as a whirlpool of glee, swirling us all around the room, an eddy of edification into the spiritual mysteries of the spirits. 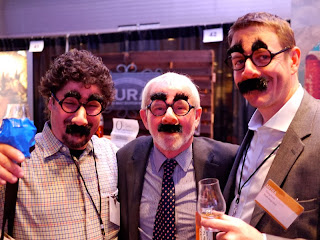 Moments stand out: Putting on the Grouchos with former Jura Distillery Manager and current Brand Ambassador Willie Tait; Craig from The Glenlivet pouring the superb 18 and the delicate 25; the lovely and straight-shooting Lauren Kuchar from Blue Ridge Distilling Company; the fabulous woman from Glenmorangie whom, after a bit of time, and with no wheedling required—maybe because Stephen was nearby, exuding his normal calm mastery—splashed a 25 year dollop into my glass. I was unclear if it was their standard mind-blowing 25, or a 25-year old single cask, and after imbibing its heady nose, I no longer cared. Reader: it was wonderful and I resisted the impulse to glorp it and beg for more. I made my way to the Glen Grant table, meeting Robin Coupar and then enjoying a glass of their Five Decades, which I am on record as liking a lot.
A beautifully conceived and expertly run festival, affordably affording the discerning drinker the best of many possible whisk(e)y worlds.
A long day’s journey into a long night’s festival, and one Deadly Sin left undone: #1, Lust.

[Stephen: Just give him a couple of weeks, and he’ll have plenty of that last one–for next year’s WhiskyFest.]