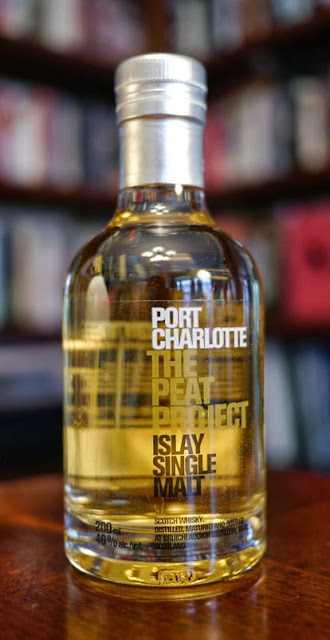 Tasting notes:
As many whisky aficionados know, spilling a small amount of whisky when pouring is no cause for distress if you know how to take advantage of the situation.  We recommend that you wipe the spill into your hands, work it around like an aftershave, and then bring your nose to your cupped hands.  With the alcohol dissipated, you get all of the base notes of the grain.  So it was with the Peat Project when Stephen McKlutz of Clan Doofus poured out our measures.  In his hands, it smells like toasted grain breakfast cereal in an earthenware bowl, the kind given to souls upon their arrival in Purgatory.  We were intrigued.
On the nose, the ominous peat smoke gives way to gin, gin, gin!  Really, it’s the smell of a very bad gin, but this is to pay it a compliment, in a sort of “the enemy of my enemy is my friend” way.  Bacon is in there.  Or perhaps it’s just thin strips of peat that are cooked in a cast iron frying pan.  I like to imagine the smells of a bathtub gin produced during Prohibition and labeled “Pete E. Bogg’s Miraculous Cures-It-All.”  I am already feeling better, in fact, and I don’t think I was sick!  On the mouth I’m a pig at trough.  Just going for it.  Pine needle tea, fermented vetch, and discarded corn cob pipes through which a licorice cigar tobacco was smoked on a lark.  Mmmmm….
The finish is fresh mozzarella in a cloudy soup.  Refined cantaloupes sliced with rusty piano wire that had garroted an ermine.  Melted ricotta used in place of grout on kitchen tile.  The gin notes have dissipated entirely at this point and, now that I think of it, there was never any gin on the mouth.  Strange dentures made from charcoal and Crows® candies that I use to chew on kiln dried peat jerky.
With a little water, it’s a watered down, peated Islay whisky.  Muted like Elizabeth’s trombone.  [Bill: John, don’t you mean “elizabeth!”?]  Yes, but do you don’t have to yell at me!  Jeez!  A 5th grade science fair project that was not displayed at the fair because of the concern over the other children’s feelings.

Now let’s take a look at that word “projects.” Another word for experiment.

As is so often the case with Public Enemy, Bruichladdich and Port Charlotte make you look at things differently, removing the scales from your eyes.  Yo, bum rush the malt!