We were happy to take on the daunting task of reviewing something that we could not consume (a huge change of pace for us) in trying out the NEAT Spirits Glass.  We thought it would be most helpful to try it out by comparing it to the Glencairn glass.  John and Stephen conducted the experiment, using an American Whiskey and then a Scotch Whisky to see how the hardware performed with each. 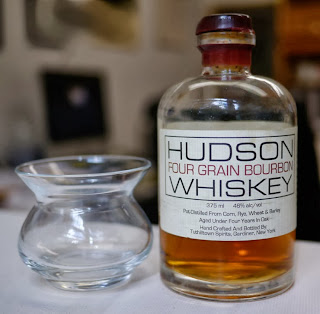 John: The Glencairn has the classic sillouette of a Modigliani subject.  Graceful, almost regal, with a refined delicacy and taciturn bearing suggestive of mystery.  The NEAT glass, by contrast, has the unmistakeable sillouette of the Venus of Willendorf.  It’s an FTD florist vase left in a microwave for three and half days.  On high.  These shapes produce vastly different noses.  We approach the Glencairn with care.  It’s rather like a potato cannon and, if you’re not careful, it can blast a powerful cask strength bottling right into your sinuses with the urgency of an arc welder.  Wasn’t the planet of Alderaan annihilated with a Glencairn laser?  Experience teaches you to nose gently, like the Modigliani subject would if a 12 year old boy with a crooked smile asked her to “smell my finger.”  But the NEAT glass has an entirely different approach.  You can nose away to your heart’s delight.  I think, in fact, that I may have snorted like a contented piglet at one point.  And why not?  I find a round caramel sitting in a swirl of smooth, Egyptian cotton sheets.  The mouth is different, too.  The Glencairn tends to place the expression on the tip of your tongue.  The NEAT glass is better configured to drop its payload on the middle of your tongue.  We’re getting more caramel with the Glencairn now, but lighter notes with the NEAT: lemon, corn, perhaps cornhole played with lemons.  NEAT is supposed to stand for Naturally Engineered Aroma Technology, but we think it should stand for Nostril Entertaining Atomic Tumbler. 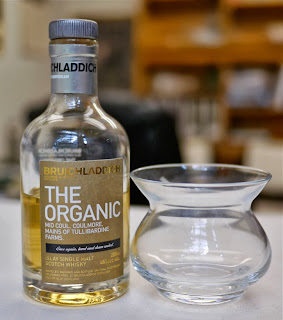 Stephen: Right off the bat, I couldn’t help but think that the NEAT glass looks like a scale model of something from Walter White’s lab (the ideal one, not the rolling one).  But as was the case with Breaking Bad, I found myself drawn to it and wanted to get more of it.  Now trying it with Bruichladdich Organic, the nose is nicer in the NEAT glass, perhaps because it’s more diffuse.  With this light and complex Scotch whisky, the more muted nose from the NEAT glass offers a wider spectrum of aromas, it seems, and more sweetness than the Glencairn highlights: there was more hay on the nose from the Glencairn, and, perhaps unsurprisingly, more melon from the more curvaceous NEAT glass.  Fascinating.  Trying to drink out of it brings to mind those newfangled waterfall bathroom faucets.  From the NEAT, it feels harder to get the good stuff into my gullet, but maybe it just takes a little getting used to.  How in the world could Bill glorp a whisky from one of these? [John: I don’t know, but it’d be fun to watch him try.] The finish on this whisky is pretty much identical whether I drank it from a Glencairn or a NEAT glass, but then again, my mouth was exactly the same in both cases.  Overall, an interesting difference between the two, one that really centers on the nose each glass helps facilitate.  Want to be able to nose a particularly high ABV dram without singeing your nose hairs?  Well, try a NEAT glass.  Or maybe just don’t stick your nose so damn far into your Glencairn.  Want a glass that will allow your dram to open up beautifully, quickly filling the whole room you’re in with the lovely smell of your whisky?  Definitely try a NEAT glass.  Want a glass that looks a lot more like a spittoon than a tulip?  You know what to do.


–Our thanks to George Manska and Christine at Arsilica, Inc. for the sample glasses.