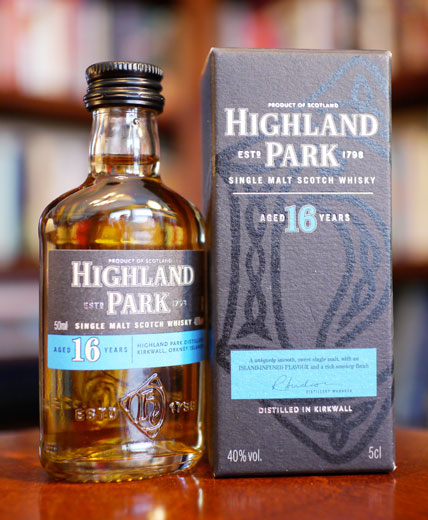 Tasting notes:
The Highland Park 16 is a whisky out of time, a blindly-faithful traveler who can’t find his way home—and who refuses to ask directions. It was a “traveler’s only” dram discontinued in 2010, which goes a long way to explaining why I’d never heard of it, seen it, smelt it, nor tasted it. Some dusty overpriced mini-nips, hiding in out-of-the-way duty-free shops in little-frequented airports comprise pretty much the available stock. None of which makes sense, because the HP16 at least 106.66666% better than the HP15, if being only 88% as good as the HP18. (Math joke, occupational hazard, 16/15ths and 16/18ths.) The nose is light, floral, and delicately bready. Much as if shortbread were made with ghee, powdered sugar, and thrice-sifted flour, then combined with the puffiest, fluffiest Portuguese breakfast pastries, rolled out with injera banana bread, and finally shredded with Wolf Claw Meat Handler Forks. Breadfruit and coconut husks, the cornhusks from banana split tamales, and John Mayer’s banana hammock. [WARNING! Only click on the “banana hammock” link if you are prepared to see something that you will never be able to unsee.]
It’s a svelte mouth, Taylor Swift’s lips, if she weren’t a virago singing a pseudo-virginal siren song of spite and disavowal, but rather were she actually Tom Swift, single-handedly creating marvelous inventions and defeating evil forces with the power of Science. Svelte, yet full-bodied, a paradox incarnate, trailing intimations of immortality, fleeting drops of banana flan, bandana-clad fans, cherry cough elixir sprinkles, sherry (duh), and Frankie Valli and the Three Seasons (no need to include Winter).
The finish is a full-size Celtic Harp, played by Yoko Ono, improbably situated in the entryway of the Newport Yacht Club. It’s Draco Malfoy’s wand—no, John, not that wand, geez. It feels much bigger than its 80 proof: It’s Large Marge and Sarge in Charge of the Madame Defarge Barge. A white wine jello shooter version of port made with XO cognac instead of cheap brandy, matured by the harrowing and liberating experience of driving a cab in New York City.

–Our thanks to Sarah for snagging this one for us in Deutschland!